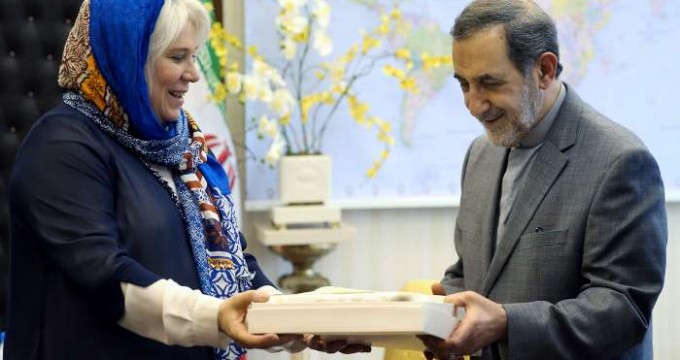 Kerry in no position to discuss Iran’s defense power

TEHRAN, Apr. 11 (MNA) – Head of Iran’s Strategic Research Center said US Secretary of State John Kerry is in no position to talk over Iran’s defense power.

“The two side’s eagerness to boost and reinvigorate cooperation in various political, economic, trade and scientific aspects remains as a blessing given that good negotiations have been held in these areas,” he continued.

The official referred to the upcoming visit of the Italian prime minister as well as some European Union authorities in near future noting “excellent conditions have been provided to bolster ties with European countries.”

Foreign Minister of Estonia Marina Kaljurand, for he part, stated “you rightfully touched upon the historical relations between the two countries while these ties have been well expanded due to several reasons.”

Kaljurand stressed that the time is now ripe for improving collaborations, “common venues for strengthening cooperation have been anticipated at meetings with Iranian officials.”

She further pointed to the visit to Tehran of EU foreign policy chief Federica Mogherini in the coming week deeming the trip as a major step towards expansion of ties between Iran and the European Union (EU).

Later speaking to reporters on the meeting with the Estonian official, Iran’s Velayati said “recent clashes over the disputed Nagorno-Karabakh region between Azerbaijan and Armenia was one issue raised at the session.”

“Iran appreciate the fact that both countries agreed to the ceasefire suggested by the Iranian President during talks with Armenian and Azerbaijani counterparts and put an end to the ruinous war,” he added.

Highlighting that both parties were granted their rights and the occupied cities were liberated, Ali Akbar Velayati said “I believe that the Minsk Group failed in resolving the issue while countries like Iran, in view of their good faith and good ties with both countries, can act as mediators to prevent rekindling the spark.”

In response to a question about recent comments by John Kerry, Velayati said “Iran would never negotiate its defense power with any agent.”

Pointing to remarks on setting restrictions over Iran’s defense power in the region and dubbing that as the second JCPOA, the official emphasizing that Mr. Kerry has no right to deal with the issue.

He recalled that US has made several similar claims during the Islamic Revolution which all need to be ignored; “the missile program is meant to maintain the territorial integrity, sovereignty, independence and revolutionary achievements.”

The Iranian nation has reached the current level of capability on the basis of self-sufficiency and would never ask for anyone’s permission for promoting self-defense, concluded head of Iran’s Strategic Research Center.