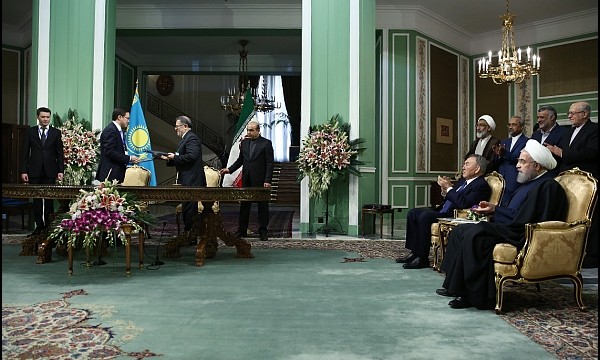 Iran and Kazakhstan signed 9 cooperation documents in Saadabad Complex on Monday, during the visit of President of Kazakhstan Nursultan Nazarbayev to Iran.

Commander of the Iranian Army’s Ground Forces Brigadier General Ahmad-Reza Pourdastan said that the country plans to stage 4 massive drills in the current Iranian calendar year, which started on March 21, 2016.

Kerry in no position to discuss Iran’s defense power

Head of Iran’s Strategic Research Center said US Secretary of State John Kerry is in no position to talk over Iran’s defense power.

Mogherini due in Tehran on Saturday

Daesh terrorists were killed after attempting to enter Iran.

Italy premier due in Iran Tuesday

Italian Prime Minister Matteo Renzi would visit Iran on Tuesday and would be accompanied by 120 leading economic activists and representatives of companies.

President Rouhani: Muslim world voices of unity and cooperation should be heard everywhere

President Hassan Rouhani said that Iran and Kazakhstan believe that the Islamic world’s voices of unity and cooperation should be heard everywhere.

UK is ready to help development of Iran airport and aviation industry, British Minister of State at the Department of Transport Robert Goodwill said on Sunday.

UN envoy for Syria due in Tehran