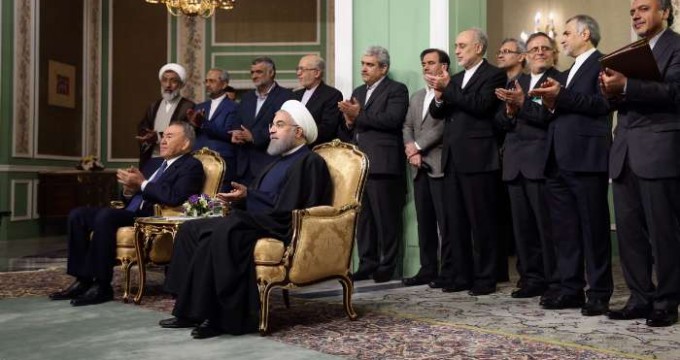 “Establishment of stability and security in the region, specially in Afghanistan, Iraq and Syria, ending the war in Yemen and finding political means to settle the problems were among the issues discussed and studied, and both sides enjoyed the same views,” Rouhani said in a joint press conference with Nazarbayev after holding a bilateral meeting in Tehran on Monday.

Noting that both countries have identical views on regional issues, he said, “We believe that the issue of extremism, terrorism and differences among various religions and cults are three important dangers threatening the Muslim world.”

Elsewhere, Rouhani underlined the necessity for the further expansion of ties and cooperation between Tehran and Astana in different political, economic, cultural, technological, scientific and agricultural arenas.

Nazarbayev, for his part, stressed the need for maintaining unity among the Muslim states and fighting against terrorism.

He also underscored his country’s determination to develop cooperation with Iran in different economic, trade, agricultural, industry and mines fields.

Many Kazakh companies, as well as ones from Russia – Kazakhstan’s partner in the Eurasian Economic Union along with Belarus – are interested in entering the Iranian market.

Rouhani paid an official visit to Kazakhstan on Sept. 9 to meet with Nazarbayev. The two leaders discussed avenues to development and ways to strengthen Kazakh-Iranian cooperation. They also oversaw the signing of a number of agreements.