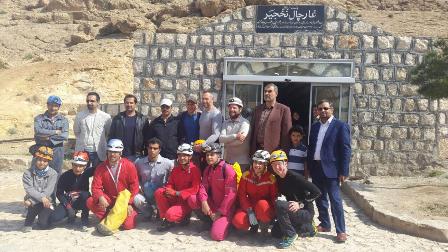 The French tourists headed by a founding member of the French Cavers Association, were accompanied by several Iranian cavers, Director General of the provincial Cultural Heritage, Handicrafts and Tourism Organization said.

Seyyed Mohammad Hosseini noted that the French nature hunters were encouraged to tour the attractions of the cave after viewing indescribably attractive photos taken last year by a group of French photographers.

He said that the historical and natural attractions of Delijan, Khomein and Mahallat are among the most visited places in the central province by domestic and foreign tourists during the Iranian New Year holidays started March 20.

Nakhjir Cave, dating back 70 million years, is located between Delijan and Naragh townships.

The recently discovered cave is a rare geological phenomenon that belongs to the Cenozoic period and has been formed as a result of tectonic factors and aerobic chemical reactions.

The mysterious cave is filled with exotic crystal rocks with different shapes of eagles, turtles, deer, pigeons and human statues made of limestone. Colorful dolomite deposits around the cave have created a huge capacity of crystalline sponges, coral gardens and cauliflower-like cones.

There is a lake at the bottom of the cave surrounded by strange walls, ceiling and enigmatic stone statues that give indescribable beauty to the cave.

There are many other tourist attractions in Delijan including Haj Mahdi Naraqi reservoir, Naragh Grand Mosque, and Kahak Cave and Castle.