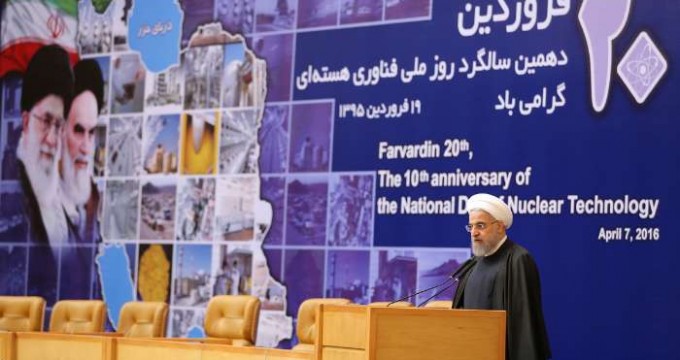 Tehran, April 7, IRNA – President Hassan Rouhani said on Thursday that Tehran believes in smart power as a combination of both soft and hard powers would be effective for facing possible threats.

The President made the remarks here at a ceremony to mark the 10th National Nuclear Technology Day (falls on April 8 this year).

A country which faces possible threats should build and strengthen its own power. We know that sometimes soft power and other times hard power is effective,’ said the President.

‘We believe this is an era of everything but at the same time we are not a threat against any country neither we are planning or have planned against any other country. We consider security of other neighboring states and the region as our own security,’ stressed the President.

‘If any country thinks that Iran is a threat against it, it has made a miscalculation. Iran is no threat to anyone neither it has waged a war against any country and is not to do so

‘We have not invaded any countries in the past 200 years and we are not to do so in the future. But Iran is a country which will defend its own rights when it is necessary both with soft and hard powers. This is what we have done during the eight-year imposed war (1980-1988).’

President Rouhani stressed that the past Iranian calendar year (1394) which ended on March 19, 2016, ‘was a year to show Iran’s soft power.’

Appreciating efforts made by Iran’s nuclear team, the President said, ‘We are proud of the art of our men in the both fields of diplomacy and nuclear technology. We are proud of both these powers.’

He further appreciated the Iranian diplomats who made round-the-clock efforts to reach the July nuclear which led to the signing of the Joint Comprehensive Plan of Action (JCPOA).

However, noted President Rouhani that the opportunity made by the JCPOA ‘will not last forever.’

JCPOA is an opportunity for attracting technology, investment, constructive economy, unity and interaction with the world, he said.

Anyone who thinks that there is a border between science, technology, economy and politics is making mistake, he went on to say.

More in his speech, the President referred to moderation as the ‘basis’ for progress of a nation.

Islam is based on moderation,’ President Rouhani said adding that moderation means to ‘pursue a balanced approach for dealing with the world.

‘We cannot trust or distrust a person for 100 percent.’

Noting that enemies of the country have promoted the policy of Iranophobia, the President said one of the top priorities of his government was to stop that policy and help the world trust Iran.

‘The first priority for the government in the past two and half years was to defeat the policy of Iranophobia and lead the world to trust’ the country.

As for the extremism, President Rouhani said it would harm everyone.

‘Extremism, particularly as a school of thought, is the biggest danger for any society.’