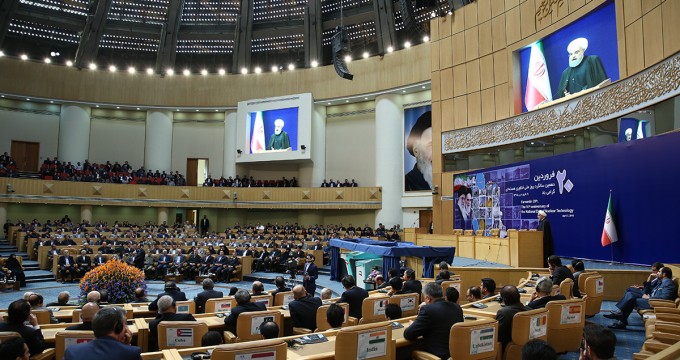 President: Iran no threat against any country

President Hassan Rouhani on Thursday stressed that Iran has no plan to threat any other country stressing that Tehran considers security of other nations, particularly its neighboring states, as its own security.

First trilateral meeting of Iran, Russia and Azerbaijan Republic attended by foreign Minister Mohammad Javad Zarif, his Russian and Azeri counterparts was held in Baku on Thursday with an emphasis on boosting cooperation among the countries.

President Hassan Rouhani unveils some of Iran’s latest nuclear achievements during a ceremony held ahead of the country’s National Nuclear Technology Day on Friday.

Two Republican U.S. senators who oppose the nuclear agreement with Iran introduced a bill on Wednesday that would keep Iran from gaining even indirect access to the U.S. financial system or using U.S. dollars in business transactions.

President Hassan Rouhani has described the Iranian diplomats’ success in their nuclear talks with the world major powers as the most significant day for diplomacy in the past 100 years.

Iran’s exports to US increase by six times

Iran’s media reported on Thursday that the country’s exports to the United States increased six times over a period of 11 months starting March 2015.

Azerbaijan wants to tackle terrorism with Iran and Russia’s help

Deputy Head of Atomic Energy Organization of Iran (AEOI) said on Thursday that two new nuclear power plants will soon be built in Bushehr after examining one or two technical points.