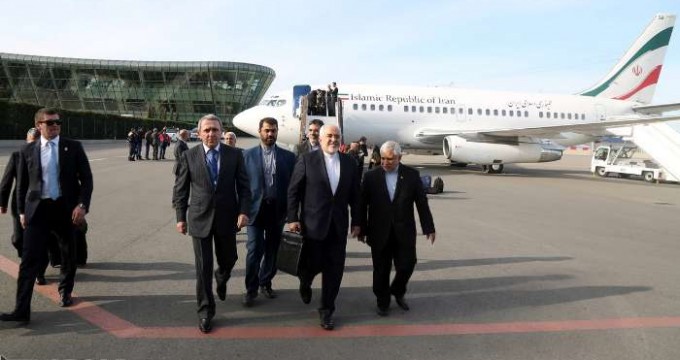 Talking to reporters upon arrival in Baku on Wednesday, he said Iran has always demanded a halt to clashes between Armenia and Azerbaijan going on in Karabakh.

He noted that following earlier talks between Iranian and Azeri presidents in Tehran, the tri-partite meeting between Iran, Azerbaijan and Russia is going to discuss different dimensions of cooperation between the participating countries in such areas as transit of goods.

The Iranian foreign minister said that the first session to meet Thursday morning in Baku will focus on ways of cooperation.

He said the meeting provided a chance for each of participating countries to discuss the most important regional and international issues during two-party meetings.

Zarif said he is going to discuss a number of issues, Syrian developments in particular, with his Russian counterpart Sergei Lavrov on Thursday.

Pointing to his meetings with Azeri and Turkish counterparts in the Iranian city of Ramsar on Tuesday, he said he feels the need to continue his talks with Azerbaijan’s foreign minister on the necessity of stopping clashes with Armenia.

Zarif is in Baku to take part in a meeting with his Russia and Azeri counterparts.