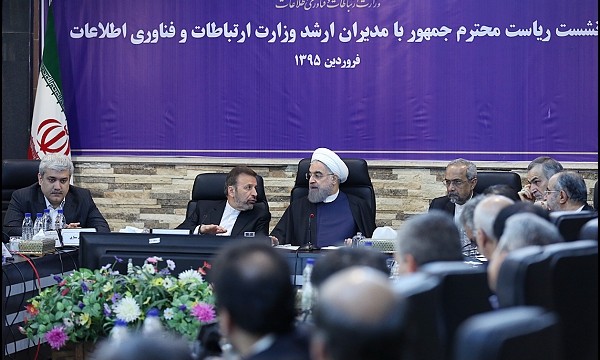 President Hassan Rouhani made the remark in a meeting with minister, deputies and senior managers of the Ministry of Communications and Information Technology on Monday. He added that the IT and ICT are the two fields the country could take the most advantage of in the post-sanctions era in order to achieve great advances in the areas of industry, science and technology.

The President said ‘good steps’ have been taken in regard to ‘National Information Network’ and its frameworks have been approved; “people’s communications should be safer in this network,” he stressed.

“We have no right to pry into people’s private lives,” he said. “Trust is the most important principle. We should be careful not to make any decision that would lead people to trust a foreign social network more than a domestic one.”

Rouhani further highlighted the role of communications as an integral part of life, laying emphasis on the ‘correct’ use of facilities and information; “the tools that have been in the hands of human beings have always had the possibility of being misused. Bombs and weapons of mass destruction have been produced through science. But if science has been misused, that does not mean we should abandon science altogether, just as an offensive text should not mean all pens must be broken.”