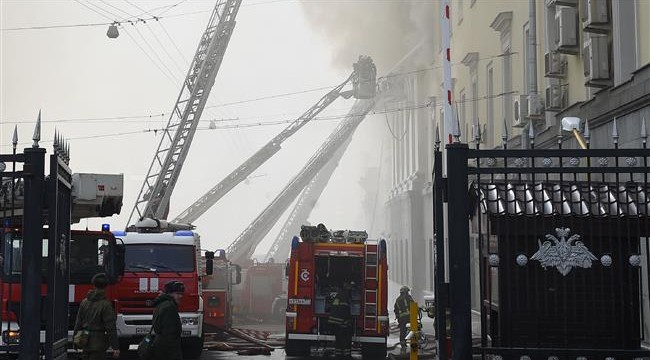 A fire has broken out in the Russian Defense Ministry building in central Moscow, resulting in the evacuation of dozens of people.

According to media reports and police sources, the incident occurred on Sunday morning in the Russian Defense Ministry complex in downtown Moscow, a historical multi-story building dating from the end of the eighteenth century.

“The fire broke out on the third floor of the five-story building belonging to the Russian Ministry of Defense, on the Znamenka street. 40 people managed to leave the building on their own, while five more people were rescued,” a police source said.

Several hundred firefighters and several cranes were reportedly deployed at the scene, battling the blaze in the building.

The emergencies services said the roof partially collapsed as a result of the blaze.

News agencies reported at least one firefighter has been injured.

The Defense Ministry, confirming the incident, said the fire would not affect or hamper its core operations.

There were no immediate reports about the cause of the fire; however, the fire may have reportedly started as a result of a short circuit involving old electrical wiring.