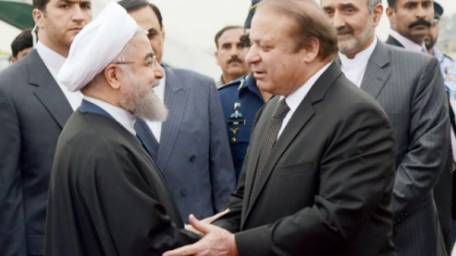 Islamabad, March 25, IRNA – Pakistani Prime Minister Nawaz Sharif said his country is set to use the opportunity of developing trade and economic relations with Iran in the wake of removal of sanctions.

In a speech following signing of six cooperation documents between Iran and Pakistan which was also overseen by Iranian President Hassan Rouhani, he said that in bilateral negotiations it was agreed to boost trade exchanges.

‘This is the third time in less than three years that I am meeting the president of Iran which is a sign of sincerity and depth of friendly relations between the two countries,’ he added.

Sharif also said that his talks with Rouhani centered on expansion of bilateral ties and cooperation in regional and international issues.

He welcomed signing of cooperation agreements and hoped that bilateral relations will increase at the highest possible level to secure the interests of the two countries.