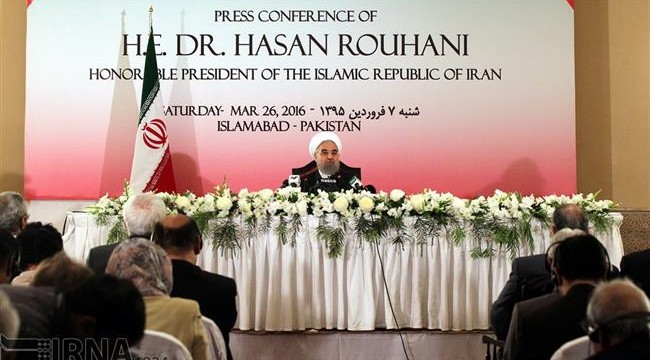 Iran’s President Hassan Rouhani has welcomed the ceasefire in Syria, expressing hope that peace talks on the conflict in the Arab country could settle the crisis.

Speaking at a press conference in Islamabad, Pakistan, on Saturday, Rouhani said the truce and the ongoing peace negotiations would hopefully pave the way for the establishment of a new constitution and holding new elections in Syria.

The UN-brokered indirect peace negotiations have continued in Geneva, Switzerland, between delegations representing the Syrian government and the foreign-backed opposition groups. The talks have hit impasse on several occasions due to obstructionist measures by the Syrian opposition.

The ceasefire went into effect on February 27. Russia and the United States worked for the truce agreement.

Elsewhere, President Rouhani commented on the ties between Iran and Saudi Arabia, saying that Tehran favors defusing the current tensions in the two country’s relations. Rouhani also hoped that the current differences between Tehran and Riyadh would be resolved soon.

On January 2, Riyadh executed 47 people among them prominent Shia cleric Sheikh Nimr al-Nimr in defiance of international calls for the release of the cleric and other jailed political activists in the kingdom. The move sparked anger in many countries.

Protests were held outside the Saudi diplomatic missions in the Iranian capital, Tehran, and Mashhad and the buildings were partly damaged during the angry demonstrations. Riyadh severed ties with Tehran afterwards.

On the issue of the conflict in Syria, the Iranian president said Tehran and Riyadh have always had different stances on this issue, but Iran sticks to its view that the arms supply to the terrorists must be cut and that work must be done to stop the Daesh Takfiri terrorists from selling oil they are in possession of to other countries.

The Iranian president arrived in Pakistan on Friday on his first landmark visit since the implementation of a nuclear agreement between Tehran and the P5+1 group of six countries, known as the Joint Comprehensive Plan of Action (JCPOA).

Rouhani is accompanied by a high-ranking politico-economic delegation, including 60 Iranian businessmen, during his two-day official visit to Islamabad.

The trip is aimed at discussing ways of further strengthening trade and economic relations between the two neighbors and holding consultation with senior Pakistani officials on the latest developments in the region.