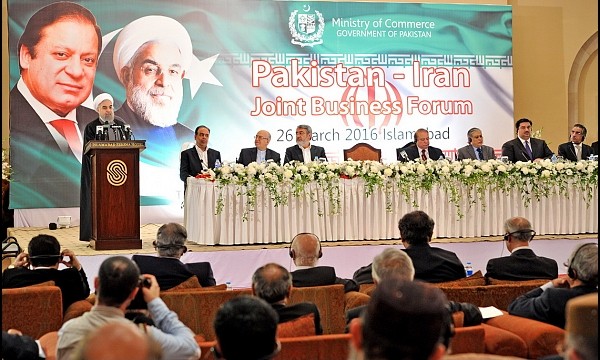 Islamabad, March 26, IRNA – Iranian and Pakistani businessmen from both public and private sectors came together here on Saturday at a joint meeting attended by the Pakistani Prime Minister and the Iranian President who is on the second day of his visit to Pakistan.

Welcoming President Hassan Rouhani and Muhammad Nawaz Sharif and other participants, Federal Minister for Commerce, Khurram Dastgir Khan, said that the presence of high-ranking officials at the Iran-Pakistan Joint Business Forum provides the neighboring nations with a chance to expand ties.

‘The attendance of Iran and Pakistan leaders at the major business and economic forum will provide the two countries with a unique chance to deepen ties,’ Dastgir Khan said.

The Pakistani minister expressed hope that the removal of sanctions against Iran and opening up of its economic doors, promote the trade and economic ties of the two neighbors.

According to Dastgir Khan, Tehran and Islamabad have set a goal to boost their trade volume to five billion dollars.

‘The signing of the strategic five-year trade cooperation document between Iran and Pakistan by the leaders of the two countries yesterday is expected to leapfrog the bilateral trade and economic ties,’ he said.

Tehran and Islamabad hammered out six cooperation documents on Friday.

He is accompanied by a high-ranking political and economic delegation.

Rouhani was welcomed by Nawaz Sharif at the airport.