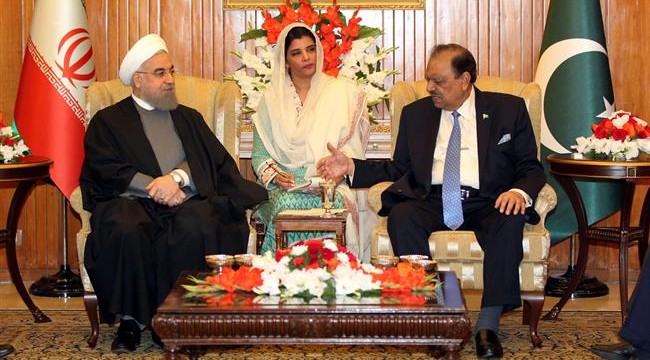 “As Iranian borders are safe for Pakistan, efforts should also be made on the other side of the border to boost security in the border region,” Rouhani said in a meeting with Pakistani President Mamnoon Hussain in Islamabad on Saturday.

He added that Tehran is resolute to boost relations with Islamabad in different sectors and to meet its energy needs.

The implementation of the nuclear agreement, dubbed the Joint Comprehensive Plan of Action (JCPOA), and the lifting of sanctions against Iran have created the opportunity for both Tehran and Islamabad to further expand their cooperation in energy, petrochemical and banking sectors.

After Iran and the P5+1 group of countries started to implement the JCPOA on January 16, all nuclear-related sanctions imposed on Iran by the European Union, the Security Council and the US were lifted. Iran has, in return, put some limitations on its nuclear activities.

The nuclear agreement was signed between Iran and the permanent members of the UN Security Council – the United States, France, Britain, China and Russia – plus Germany on July 14, 2015 following two and a half years of intensive talks.

The Pakistani president, for his part, pointed to the spread of terrorism across the region and said Tehran and Islamabad should boost cooperation to counter terrorism and extremism.

Hussain said Islamabad is keen on strengthening relations with Tehran, particularly in economic fields, adding that further efforts should be made to increase bilateral trade exchanges which currently stand at over one billion dollars.

In a meeting with Sartaj Aziz, advisor to Pakistan’s Prime Minister Nawaz Sharif on national security and foreign affairs, on Saturday, Rouhani said Muslim nations should boost their unity to solve problems facing the Muslim world.

He added that Iran’s policy is based on strengthening cordial relations with neighbors and Muslim states.

“The Islamic Republic of Iran attaches importance to the expansion of its relations with Pakistan in all issues of mutual interest,” Rouhani said.

He called on Iran and Pakistan, as two main Muslim countries in the region, to make more efforts to boost unity and security in the Muslim world through bilateral cooperation and interaction in regional and international organizations such as the Organization of Islamic Cooperation.

The senior Pakistani official, for his part, said Tehran and Islamabad should step up cooperation in fighting against terrorism and extremism in the region.

Rouhani also held a separate meeting with Pakistani Chief of Army Staff General Raheel Sharif on Saturday during which the two sides stressed the importance of enhancing Tehran-Islamabad cooperation to tackle terrorism in the region and promote regional peace and stability.

The Iranian president arrived in Pakistan on Friday on his first landmark visit since the conclusion of the JCPOA. He is heading a high-ranking politico-economic delegation, including 60 Iranian businessmen, during his two-day official visit to Islamabad.

On Friday, Rouhani held talks and attended a joint press conference with Pakistani Prime Minister Nawaz Sharif. In the presence of the Iranian and Pakistani premier, the two countries’ officials signed six documents for cooperation in different fields of trade and commerce, insurance, culture, higher education, health and medicine.