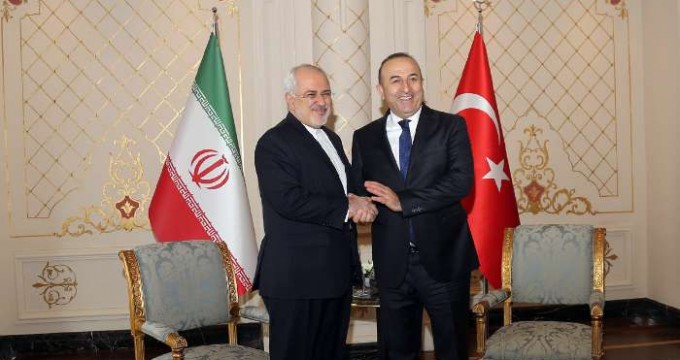 Istanbul, March 19, IRNA – Visiting Iranian Foreign Minister Mohammad Javad Zarif underlined that Tehran and Ankara have consensus on the necessity for maintaining territorial integrity and sovereignty of Iraq and Syria.

Zarif and his Turkish counterpart Mevlüt Çavuşoğlu in a meeting here on Saturday conferred on the latest regional developments as well as ways to bolster bilateral relations between the two neighboring countries.

Çavuşoğlu said that Turkey and Iran are suffering from the common threat of terrorism.

He also said that the easing of Western sanctions on Iran over its nuclear program means the two neighbors can easily exceed their previous trade target of $30 billion annually.

Zarif, for his part, confirmed that the two countries are keen to boost the volume of their trade balance to $30 billion per year.

Heading a delegation, he arrived in Istanbul on Saturday morning.
While in Turkey, the Iranian minister is to hold separate meetings with Turkish President Recep Tayyeb Erdogan and Prime Minister Ahmet Davutoglu.

Davutoglu heading a high-ranking delegation arrived in Tehran on March 5 to mark the first official visit by a Turkish premier in the wake of the nuclear Joint Comprehensive Plan of Action.

He was accompanied by ministers of economy, customs and trade, energy, transport, communications and development, government officials and representatives of major Turkish media.

The visit followed consultations between the two countries’ foreign ministries with the objective of expansion and strengthening of political, cultural, and economic relations.