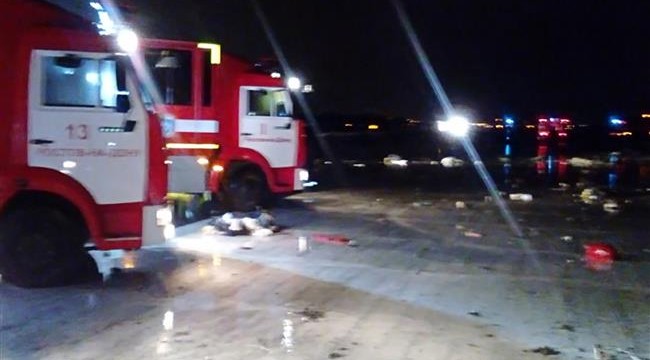 A  United Arab Emirates passenger plane has crashed during landing in the southern Russia, killing all 62 passengers and crew members on board.

​Flydubai flight FZ981, en route from Dubai to the southern Russian city of Rostov-on-Don, is reported to have crashed due to poor visibility near the runway at 03:50 local time (0050 GMT) on Saturday.

“A Boeing 737 crashed as it was coming into land,” the TASS news agency quoted a spokesman from the local ministry as saying.

In a statement, the Investigative Committee of Russia confirmed the death of all 62 people aboard the plane.

“The aircraft hit the ground and broke into pieces,” the Committee said in a statement on its website. “According to preliminary data, there were 55 passengers aboard and 7 crew members. They all died.”

“At present, we are looking into two main theories for the plane crash in Rostov-on-Don: pilot error in connection with deteriorating weather conditions or a technical error,” Interfax news agency cited Oksana Kovrizhnaya, a representative of the Committee, as saying.

This CCTV video posted online appears to show the moment the Boeing 737-800 crashed.

The plane came down inside the airport’s perimeter, about 250 meters (yards) short of the start of the runway.

“We are aware of an incident involving our flight FZ981 from Dubai to Rostov-on-Don. We are investigating further details and will publish an update once more information is available,” the airline said on its Facebook account.

Local officials said there was strong, gusting wind in the Rostov area at the time of the crash.

Russian President Vladimir Putin has called for the provision of assistance to the relatives of those killed aboard the plane, according to the Kremlin spokesman.

“The head of the state said that now the main thing is to work with the families and the loved ones of those who had died,” Dmitry Peskov was quoted by local news agencies as saying.