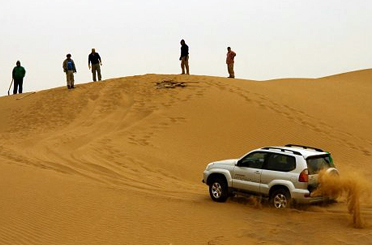 Kashan, Isfahan Prov., March 16, IRNA – Maranjab Desert beside the Salt Lake and sand hills in the desert span of Aran and Bidgol, is a combination of nature, civilization and history.

Maranjab, due to enjoying the four seasons and relative moderation of weather, diversity of tourist attractions, and diversity of animal and plant species is considered one of the most beautiful and unique deserts in the world.

Maranjab was originally the name of a caravanserai and an aqueduct which was built during Shah Abbas Safavid and later the surrounding area was called Maranjab Desert.
The average height of Maranjab Desert from the sea level is about 850 meters and it is very rich in plant coverage as well as in animal species such as wolf, jackal, hyena, sand fox, sand cat, lizard, chameleon, variety of lizards, snakes, scorpions, eagles and hawks.

The assault of the Uzbeks and Afghans on Kashan through the Salt Lake encourage Shah Abbas to immediately build a military base in the area where always 500 armed guards were maintaining safety of transfer of commodities from China to Europe and vice versa.