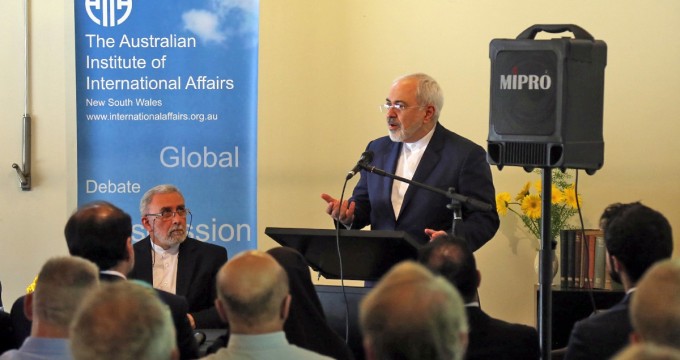 TEHRAN, Mar. 16 (MNA) – Iran FM Zarif stressed that nuclear talks would not have reached a conclusion without the resistance of the Iranian nation.Mohammad Javad Zarif, who is in Sydney on the last day of his six-nation Asia-Pacific tour, met and talked with a gathering of Iranians residing in several Australian states on Wednesday afternoon in the local time.

During the meeting, several participants shared opinions on issues of concern to Iranians living in Australia before Mohammad Javad Zarif delivered his speech.

Iranian foreign minister congratulated the new Iranian calendar year in advance saying “removing sanctions on Iranians studying abroad were among the last items that the other side concurred with during the course of nuclear negotiations which indicates that foreigners are mainly concerned about the increasing scientific capabilities of Iranian people rather than the country’s nuclear activities.”

“The presence of diversity in the Iranian society and among Iranians is a natural phenomenon as well as a great blessing that should be exploited to the interests of the country,” highlighted Zarif asserting “Iranians proved to the world their tolerance and magnanimity against problems and the nuclear talks would not have yielded fruitful results without the perseverance of the Iranian nation.”

Zerif went on to quote the US President Barak Obama who had said in a speech last year at the Saban Center “if I had an option, if we could create an option in which Iran eliminated every single nut and bolt of their nuclear program, but that particular option is not available,” commenting “the confession is rooted in the resilience of the Iranian people; we shall be proud of the nation and serve them with humbleness.”