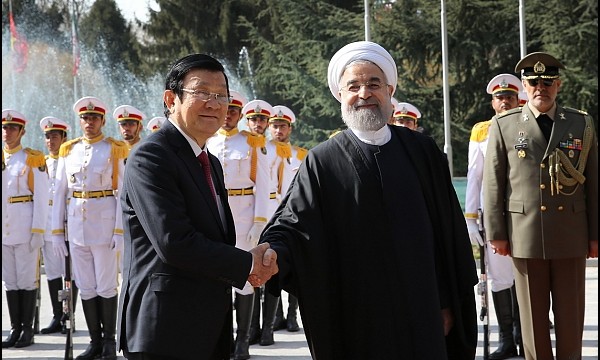 In a ceremony in Sa’adabad Palace on Monday morning, Rouhani welcomed Vietnam’s president and his accompanying delegation to the country.

During his three-day stay in Iran, the Vietnamese president will confer with President Rouhani and other senior Iranian officials on issues of mutual interest and the regional and global developments.

The two sides are to discuss various topics as expansion of economic, finance, banking, oil and gas cooperation with their Iranian counterparts.

Vietnamese president, upon arrival, welcomed nuclear deal between Iran and G5+1 and said implementation of the Joint Comprehensive Plan of Action (JCPOA) would bring peace and stability to the region as well as the entire globe.

He also called for expansion of relations and cooperation on oil, agriculture, tourism, commerce and joint venture investment with the Islamic Republic of Iran.

Iran has already voiced readiness to make investment in Vietnam’s state-run as well as private projects.

Vietnam and Iran established relations in 1973 and have increased level of political and economic cooperation through exchange of visits by senior officials from both sides.

Iran opened embassy in Hanoi in 1991 and Vietnam opened its embassy in Tehran in 1997.