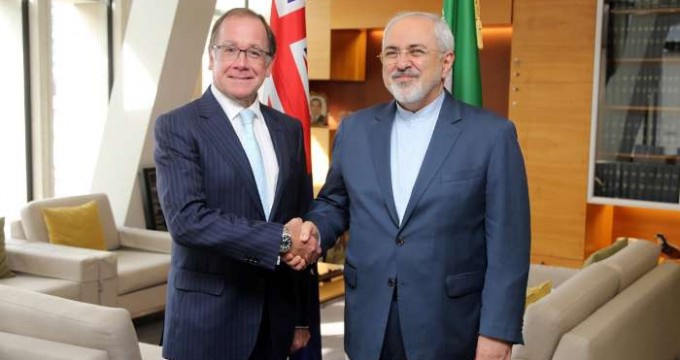 On Murray McCully’s upcoming trip to Turkey, Zarif invited him to schedule a visit to Iran.

McCully also reminded that his last June visit to Iran was a positive experience during which he had called for resumption of banking ties.

Zarif and McCully emphasized on developing ties between two countries especially economic ones.

Iranian Foreign Minister is to take part in the dinner banquet held by his counterpart on Sunday night.

On the sidelines of his trip Zarif met Iranians residing in New Zealand and said the Iranian mass participation in the February 26 elections has frustrated the enemies.

‘The elections have shown the world that they should negotiate and cooperate with Iran,’ he added.

‘We are witnessing that the Saudi Arabian regime is exacerbating its threats against Iran and its efforts to prevent rebound of oil prices is intended to deal a blow to the Islamic Republic,’ he added.

He added the Iranians are the real champions in all scenes, reiterating that the resistance and awareness of the people shows that Iranian nation should not be threatened but rather admired and appreciated.

Zarif wrapped up his official two-day trip to Thailand and set off for New Zealand Friday evening.

During his stay in New Zealand, Zarif is scheduled to hold talks with the country’s prime minister, foreign minister and a number of other ministers and senior officials on ways to improve relations, particularly in trade and economic sectors.