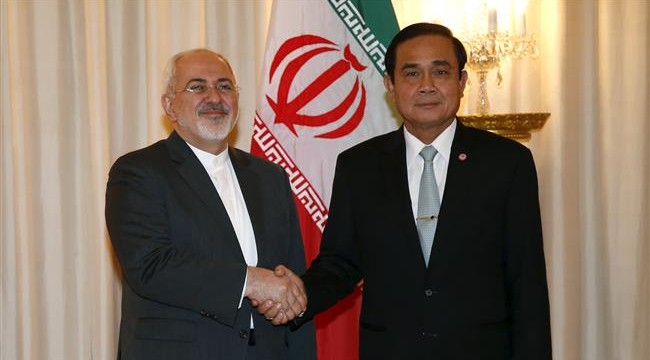 Iranian Foreign Minister Mohammad Javad Zarif has met with Thailand’s Prime Minister Prayut Chan-o-cha in the capital Bangkok to discuss the enhancement of bilateral ties on the fourth leg of his Asian tour.

On the second day of his visit to Bangkok, the top Iranian diplomat was received by the Thai premier at Government House in the capital on Friday.

The two senior officials exchanged views on the expansion of Tehran-Bangkok relations in various areas, particularly in political and economic spheres.

Late on Thursday, Zarif held talks with his Thai counterpart Don Pramudwinai over ways to enhance cooperation on issues of bilateral and regional significance.

Addressing the ACD meeting on Thursday, the Iranian foreign minister emphasized the need for collective cooperation among regional states to counter terrorism and extremism.

He further called for closer ties between the ACD and other regional bodies, including the Economic Cooperation Organization (ECO) and the Association of Southeast Asian Nations (ASEAN), to speed up the development of Asian countries.

“In order to broaden ties between member states, Iran is ready to host the first summit of [ACD] tourism ministers in Tabriz in September 2016,” the Iranian minister added.

Prior to his trip to Bangkok, the Iranian minister paid official visits to Indonesia, Singapore and Brunei. He will later head to New Zealand and Australia as the last legs of his six-nation tour.