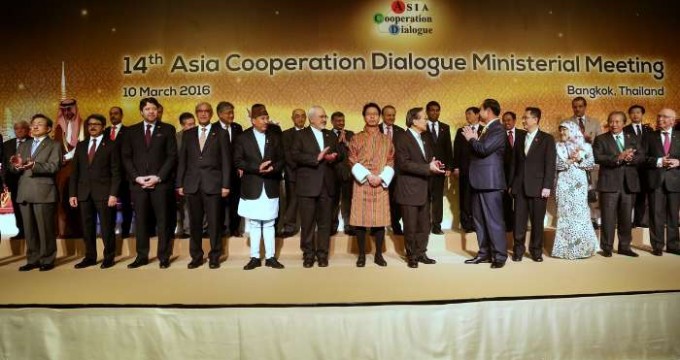 Zarif made the remarks while addressin the 14th Asia Cooperation Dialogue Ministerial Meeting in the Thai capital.

He said close cooperation between the Asia Cooperation Dialogue and other regional bodies including South Asian Association for Regional Cooperation (SAARC), Association of Southeast Asian Nations (ASEAN) and Economic Cooperation Organization (ECO) could prepare the ground for sharing experiences and would lead to regional convergence and development of Asia.

Zarif further suggested Asian states to use the Asian Clearing Union (ACU) to promote trade exchange among them.

The Tehran-based Asian Clearing Union was established on December 9, 1974.

‘To develop relations between members of the Asia Cooperation Dialogue, Iran is ready to hold the first meeting of the members’ tourism ministers in September, 2016, in the northwestern Iranian province of East Azarbaijan,’ Zarif stressed.

The Iranian foreign minister is in Bangkok on the fourth leg of his Southeast Asia and Oceania tour which has started since March 5 taking him so far to Indonesia, Singapore and Brunei.

During his visits to Singapore and Brunei, Zarif held separate talks with a number of top officials of the two countries and discussed bilateral ties.

At the end of his visit to Thailand, the Iranian foreign minister is to travel to New Zealand and Australia repsectively.