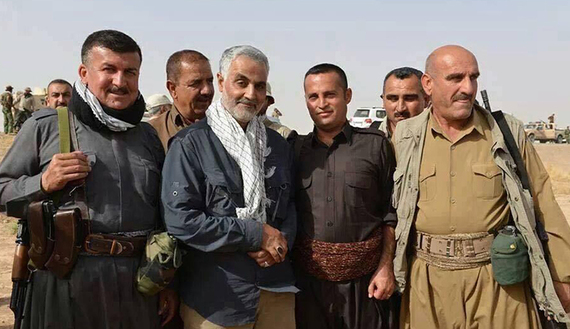 Who is the true supporter of the Kurds?

TEHRAN, March 10, TheIran Project – The Islamic Republic of Iran’s support for Kurds traces its roots in historical and ethnic unity of the Kurdish race as an inseparable part of Iranian identity and that this support is not at all temporary and based on political expediency.

The Kurds’ current situation in the region is a direct result of the western colonial countries’ foreign policy. The Kurds, before the Sykes-Picot Act, were considered part of Iran’s national and historical identity. Through history, the Kurdish people have been distanced from Iran for several reasons, but have always had a strong bond with Iran’s history and identity. They, via relying on identity and ethnic homogeneity, have always seen themselves as Iranian.
This ethnic group was a cohesive community before the collapse of Iran’s emperor and was among Iran’s geographical territory. The downfall of Iran’s emperor detached a big majority of Iranian ethnic groups from their homeland and attached them to the Ottoman territory.

In 1970, the British and other western countries laid the foundations for a similar scenario for the Kurds living in Turkey and, by signing an agreement, were about to recognize them as a self-autonomous community but broke the agreement by inking a parallel one with the central government of Turkey. At the time, their interests had been served and then they started a suppression on the Kurds. A similar development can be traced in the Republic of Mahabad which was created following a western plot and then collapsed by a plot that orchestrated by a foreign country.

From among the contradictory policies adopted by the West against the Kurds which are also in the interests of the West is their support for Ba’ath party of former dictator, Saddam Hussein. During this period, western governments, as firm supporters of Saddam, contributed to the crackdown of the Kurds as well as the destruction of their geographical territory and community by remaining silent over the chemical bombardment of Halabche and Sardasht. The westerners were only watching how their chemical bombs were being dropped on the heads of innocent Kurdish people.

Current regional woes particularly those found in Kurdish areas should be tracked down in two issues; first, strategic mistake of leaders of the Kurdish ethnic group who have always sacrificed innocent people in light of the West’s deceptive policies. Misreading the West’s intentions, the Kurdish leaders, instead of adopting a national approach, have always looked at the situation from ethnic differences and caused pain and suffering for the people.
The Kurdish leaders, including Mullah Mustafa, Qazi Muhammad, Shamzinae, at a time when country was suffering from imposed crisis by the West, decided to undermine the central government and put it in a weak situation so that it is either toppled or succumbs to the pressure of alien governments. At present, Massoud Barzani, the president of Iraq’s Kurdistan regional government, is behaving in the same way regardless of this that as soon the crisis is over, the West will start the era of suppression and containment of the Kurds.

But taking a glance at the situation of Iranian Kurds and  Kurdish people who are living in other countries show that Iran’s Kurds, under the auspices of a just and non-ethnic political system as well as due to cultural and historical proximities and racial harmony, have extensively merged with the Iranian government and society. This peaceful coexistence finds its roots in the following principles:

1.    The Islamic Republic of Iran’s ideological principles are based on religion (Islam) and justice not ethnicity.

2.    In Iranian leader’s moral thought system, unlike western nationalists and European realists, the term of “ethnic group” does not mean infidelity and is not a non-Christian matter. In fact, it is a natural criterion and difference for identifying different identities. Different ethnic identities are the base for the Iranian nation and land’s historical identity.

3.    Ethnic minorities, Kurdish speaking people in particular, have always contributed to Iran’s various political and civil structures. For instance, they have freely participated in the Islamic City Council of Kurdish-populated areas as well as the Islamic Consultative Assembly (Majlis). They can have their own candidates under full authority.
The Kurds have a faction Kurdish in Iran’s Majlis called Kurdish-inhabited areas candidates whereby propose motions and follow their regular routines. Also in the Iranian Assembly of Experts, Kurdish candidates represent their people regardless of ethnic homogeneity. Their share of votes for supervising and choosing the leader is the same as Shias.

4.    The Iranian Kurds are members of the Islamic Republic of Iran Army as well as the country’s Islamic Revolution Guards Corps (IRGC). In addition, they have a separate organization called Muslim Kurdish Peshmarga which, regardless of their ethnicity and language, along with the Islamic Republic’s Law Enforcement and security forces are defending Iran’s territorial integrity. They have sacrificed their lives for the Islamic Republic and have families with five martyrs.

6.    In schools and universities of Kurdish populated areas, teachers, pupils, university professors and students are freely busy with their teaching and education career in their own language. The Kurds also have a strong presence in other cities, Tehran in particular.

7.    Marriage between Kurds and non-Kurds is legalized in Iran. There are no legal and social restrictions for this despite all differences in terms of ethnicity and language. Interracial and interfaith marriages are common in Iran.

8.    The Islamic Republic of Iran’s support for Kurds traces its roots in historical, cultural, territorial and ethnic unity of the Kurdish ethnic group as an inseparable part of Iranian identity and that this support is not at all temporary and based on political expediency. For instance during the era of Iraq’s former dictator Saddam Hussein, Iran was the only supporter of the Kurds.
At this time, Daesh was moving close in on Erbil and Barzani had abandoned all hope of getting help from his western and Turkish friends, but Iran prevented collapse of the Iraqi Kurdish capital.

9.    Additionally, the Islamic Republic of Iran, when the US, Europe and Turkey had withdrawn their support for Syrian Kurdish people in Kobani while they were under siege, defended the oppressed people of the northern town prudently and prevented a potential mass murder.