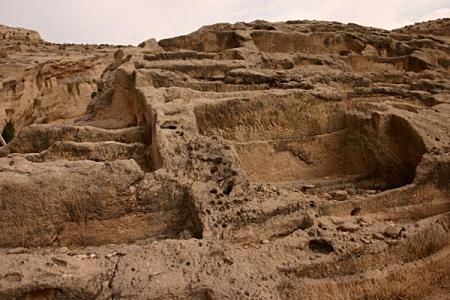 Iran is a country of top archeological standing, observed Professor R. Peter Pfalzner, from the University of Tubingen.

Speaking on the sidelines of the 14th Annual Symposium of Archeological Research, at Iranian National Museum, Tehran, from March 6 to 8, he said he was interested in working here since it used to connect many ancient cultures, IRNA reported.

“Iran is a crossroad of world’s cultures. This is why I want to work here,” said Pfalzner.

He said he and his Iranian colleague Nader Soleimani were jointly heading an archeological research study in a hot and arid region to the south of Jiroft in Kerman Province, looking for Early Bronze Age way-stations and possible trade activities.

Pfalzner said the project was sponsored by the Iranian Center of Archeological Research (ICAR) and the University of Tubingen’s Resource Cultures collaborative research center.

The scholar reiterated that the project focused on the civilizations of Mesopotamia and southeastern Iran to investigate the origins of the stone, and the use of the means to convey such heavy loads over great distances.

He said the German-Iranian team had so far mapped and explored 42 settlements.

Based on reports, the archeologists found diorite and gabbro in Kerman — not far from the Persian Gulf — which matches those used in Mesopotamian statues. In the same area, the archeologists also found deposits of chlorite, which was used to make stone vessels traded as far away as Mesopotamia and the Levant.

Close to these deposits, the researchers found petroglyphs and Early Bronze Age settlements, indicating that the stone was quarried during the Jiroft culture of southeastern Iran (approximately 3000-2000 BCE), and that it was traded across the Near East.

Pfalzner pointed out that the major aim of the ‘South of Jiroft Archeological Survey’ was to investigate the Mesopotamia and Jiroft culture in the Third Millennium BCE.

“We found many sites of the Third Millennium BCE and some of the sites are close to the natural deposits of chromate stone which was taken to Mesopotamia and this is how we could construct links between Jiroft culture and Mesopotamia.”

He said he attended the meeting to get first-hand account of activities in Iran and elsewhere.

He said that he was also to contribute to the mapping of Iranian archeology. “We recorded 70 more sites for this archeological map.”

On his experience in archeology, he said he has also worked in Syria and Iraq.

He believed that a new era of Iran-Europe cooperation has just begun. “There is a bright future.”

Also, Raffaele Biscione, from Italian National Research Council in Rome with expertise in archeology, said on March 6 that he had come to Iran to exchange information and experience with his Iranian colleagues.

Talking to IRNA on the sidelines of the symposium, Biscione said he was interested in Iranian archeology very much and has been working in this profession in the country over the past 20 years.

He added that he had spent five to six months in Iran in various excavations.

The archeologist noted that his rich experience had tempted him to return to work in the field again.

Biscione added that excavations in North Khorasan Province were a bright point in his excavation record. “I will continue working in Iran as long as I can.”

Speaking at the same gathering, Nicola Laneri, an assistant professor of Near Eastern Archeologist from Sicilia, Italy, called for exchange of students in archeology either in Iran or Italy.

Laneri said he was interested in becoming involved in archeological projects in Iran and had proposed this to archeological officials.

He said that he made the offer to Director of Iranian Center for Archeological Research (ICAR) Hamideh Choobak, and she invited him to attend the current symposium.

Laneri said that earlier he was involved in archeological research in Turkey last year.

The objective of this international event is to provide a yearly unrivalled opportunity for archeologists from all over Iran and across the globe to meet, share their experiences, exchange points of views and present the results of their researches to an exceptional and distinguished academic community. As a rule, this event is held in conjunction with an exhibition on the most representative finds collected during the corresponding archeological season culminating with the symposium.