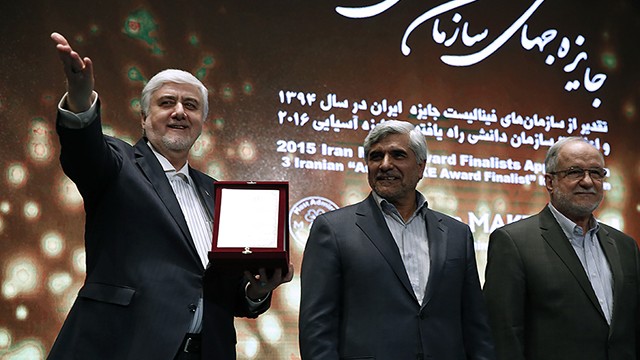 Tehran, March 7, The Iran Project – The ceremony of the Fifth Iranian Most Admired Knowledge Enterprises (MAKE) Award which was held with remarkable presence of defense related institutes was closed on Sunday in Tehran with announcing the winners.

Attended by Iran’s Minister of Science, Mohammad Farhadi and Saeed Sohrabpour, the President of Iran MAKE award Supreme Council at Sharif University of Technology, the ceremony of the Fifth Iranian Most Admired Knowledge Enterprises (MAKE) Award was held in Iranian Broadcasting Congress Hall.

The two-day conference witnessed the competition among the plenty of Iranian knowledge-based organizations, including the defense institutes which remarkably had presented in this contest.

Based on 150 global criteria, Iran MAKE Expert Panel consists of knowledge, innovation and intellectual capital management experts from all over Iran assessed MAKE award nominees, ultimately introducing top 5 finalists, three of which are due to take part in Asia MAKE competition.

Earlier in interviewing with a reporter, Saeed Sohrabpour, the president of Iran MAKE award Supreme Council had highlighted holding the awarding ceremony of MAKE prize in other continents and countries along with Iran.

Sohrabpour also went on to say that the considerable presence of Iran’s defense institutes in the fifth edition of the prize indicates the country’ determination to move toward promotion of knowledge.

Iranian National Center for Knowledge-based Management (INCKM) holds the Most Admired Knowledge Enterprise Award in Iran to boost organizations’ knowledge-based management capability in Iran. The fifth edition of this ward was held from March 5-6 2016 in Tehran.