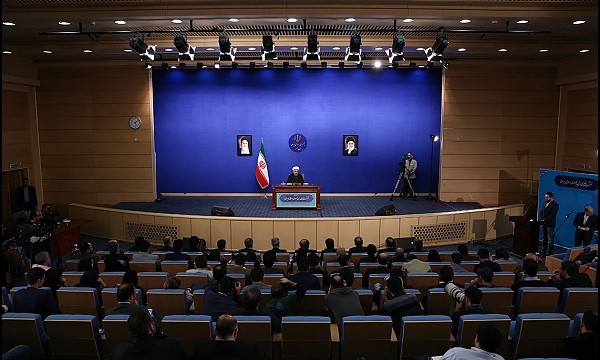 Rouhani started the press conference with his government’s epic feat of JCPOA: “the Cabinet of ‘Prudence and Hope’ worked to bring about a concrete outcome in the nuclear negotiations and succeeded in bringing home the bacon. Now, we enjoy significant situation globally, with implementation of the JCPOA. We restored hope to the people inside the country as well; we saved the country from going to the abyss of isolation and presented the public with a new source of hope for the future,” Rouhani emphasized early in the press conference.

“All parties who were elected are mostly moderate, since our nation opted for moderation; the path they walked in 2013 presidential elections was also a favorite this time.

They demand us to converge and to work together; Parliament is crucial in everyday lives of the nation and for legislation; we do not prefer a government-oriented Parliament; we want a Parliament which would cooperate with the cabinet, however in frameworks set by the Constitution; I hope to see a more cooperating Parliament than the 9th Parliament; neither their questions nor impeachments did make us angry; under any conditions, we will keep having a better cooperation with Parliament; people want us to sit together to solve problems. They do not welcome political conflict; on February 26, they clearly signaled us that political immorality would not succeed anymore.

The Constitution as well asserts that the nation’s voice would be clearly heard in the Parliament even that of religious minorities. A uniform Parliament is not a favorite; we should come to a domestic second JCPOA, which will make the country better place to live.”

“The 5+1 have been committed to obligations in economic and political terms; the private sector however would act independently; our banks are now working with the world banks with joining SWIFT; however, some insurance companies would not yet cooperate with Iran,” president added.

“Our export transactions enjoy a 10 per cent decrease in expenses; I would be pleased to tell our nation that we have attracted huge investments; we have recovered our place in oil exports and markets; we have also redeemed our role in oil markets as in the past; we need months yet to return back to our favorite positions; in airline industry, we seek to restore our favorite place as well. We want to save billions of dollars paid by Iranians for foreign airliners; we should serve domestic companies to invest more in airline industry and to redirect those moneys to our domestic airliners to produce wealth.”

“In investments, we should restore our place; in JCPOA, we hope to see cooperation from the other side; I would suggest the nation that cooperation in JCNP (his oft-quoted second JCPOA) would effectively contribute to national solidarity and betterment of the economy; the next Iranian year will be far better year in terms of public welfare; the current year has been difficult; the criticisms should also be heard; oil incomes plummeted significantly; we lost significant part of oil income, however, we run the country in a modest condition.”

“The currencies in the region have all seen depreciation with inflation very high in oil-producing countries; however, we managed to control the inflation and will have this pace regularly. For example we had a negative inflation rate in early February.”

“We have experienced a 3-percent growth rate despite all difficulties in economy; we predict even more growth rate for the next year. I would be pleased to see cooperation and unity and a coordination among government branches to that effect.”

“In the cabinet, I gave a mission to economy-related ministers to be prepared for a significant task in the upcoming year, which is bringing a revolution in economic sectors; the ministries could provide the cabinet with their short-term plans which would improve the conditions. It will be welcomed. All ministers had plans for the call; however we will examine the plans with a view of our budgetary restrictions; I would tell the private sector and cooperatives that government has taken significant steps; our ports now host huge ships which would load and unload international goods; in public welfare, we have also succeeded to modest levels.”

On a question of JCPOA effect and its place in the public and other sectors, and on the question of what plans the government would have to introduce JCPOA better, Rouhani said that the effects of JCPOA were beyond the crystal clear; “in oil exports, the situation is improved.

In banking, we have seen easing of the conditions in transactions. In foreign currency exchange rates, we have controlled the dollar price in reasonable levels; these are clear; in inflation, the situation is also clear. Everyone would feel the effect in all sectors; with coming of new planes, passengers will feel the effect. In railway, they will well feel the effect of JCPOA. The general public as well as our media feel the impact.

However, some circles would not welcome the effects. We have now our centrifuges working along with the wheels of industry; we now have finished negotiations with world companies for investments; the effects of the JCPOA are in broad daylight,” he replied. “We should be happy that sanctions no longer exist; the reality is well felt by the nations and the media should face the reality as well, they should see and represent the realities as they are.”

On the question of whether the west had been committed to obligations under JCPOA and general reluctance in part of 5+1, Rouhani said that Iran now “enjoys the trading of nuclear material,” which he believed was a significant step forward to working with the world; “no one however would claim that the JCPOA had been flawless; the criticism is there that some banks and institutions had been acting reluctantly out of fear of being financially fined for violating sanctions; they should find accurate information about the latest conditions of sanctions on Iran.

The US should have a more active role in implementing the JCPOA and should work well in par with their global role. However, that would not mean that all sanctions are still in place. Only very few institutions may still be banned from working with Iran; in general, we are in an accurate track on JCPOA and the irregularities should be addressed in all sections and ministries relevant to JCPOA,” president said.

On the question that guarantees provided by the government has attracted huge investments; what plans and projects the government would have to actually use these investments he said “we have signed agreements with foreign investors well in advance to use the investments in best manner possible; however, the foreign companies and investments should also have their own plans to contribute to country’s projects; the projects would well return the initial amount invested; for example, in plane imports, government would not pay even a single cent of oil money and the agreements are all as leasing the planes and long-term payments of the plane prices.”

On a question of Yemen and the speculations that Iran would actually negotiate behind the scenes on the fate of Yemen, since for example Iran’s embassy in Yemen had been inactive for a time, Rouhani said that “in Yemen and Iraq, Iran’s policy have been to support public in both countries; the international system has forgotten situation in Yemen and has not acted well in addressing the situation and the ongoing crisis; we will continue supports for Yemeni people despite the difficult conditions in reaching out to the refugees and delivering humanitarian aid.”

On a question of future Parliament, Rouhani said that the Parliament would be a favorable one; however, the feat was by the public in elections who came to the fore to decide definitely in the first round of the elections; “I predict a better cooperation between the cabinet and the Parliament; we would not welcome conflict; we want cooperation and improvements in public welfare; people’s message is well clear. They rejected extremism and empty slogans which would damage national interests; the sum of the forces in the Parliament is hope-inspiring and moderate.”

On the important question of Russia as having had a plan to create a federal government in Syria and the US on the other hand, having a plan to disintegrate Syria; what is your idea about both plans? What would be Iran’s reaction to Russian maneuvering in Syria, Rouhani told the press that “Iran and Russia are working regularly on Syrian crisis; the major objective is to give the Syrian people their normal life after defeating terrorists; we seek a situation where Syrians decide on their own future. We want territorial integrity of all neighbors; their sovereignty is an important priority for us; we want to see that continued ceasefire creates conditions for future elections in Syria.”

On the unofficial ban on the former president Mohammad Khatami, Rouhani told reporters that the SNSC had not any decision on the ban on Mr. Khatami.

On the question of possible moderate Parliament cooperation after the elections of February 26 and the possibility of a national reconciliation, Rouhani told the press that the real victor of the elections was the public; “we want to have a moderate Parliament who works with government to solve pressing issues of the economy, unemployment, and public welfare; the latest figures of employment are disappointing despite the attempts to create scant number of jobs; we should put our efforts to serve the economy and the nation and to create a more moderate atmosphere well conducive to constructive criticism.”

On the growth rate estimation for the upcoming year according to oil product prices, Rouhani said that the growth prediction was positive; “we will have a 5-per cent growth for the upcoming year; we will increase oil productions and related products by next August. We rely on South Pars fields in production of gas condensates and will use the maximum capacity of the fields to meet the conditions.”

On the recent deterioration of relations with Saudi Arabia and government’s plans to secure the Hajj pilgrims during the religious ceremonies, Rouhani said that there was a temporary halt to the Hajj pilgrimage following the painful event of the Mina; “there has been no agreement on the issue. We emphasize that Iranian pilgrims should not face difficulties; since we have now only an Interest Section in Riyadh with severing of the relations with the Kingdom, we have not begun negotiations as of yet” he concluded the presser.