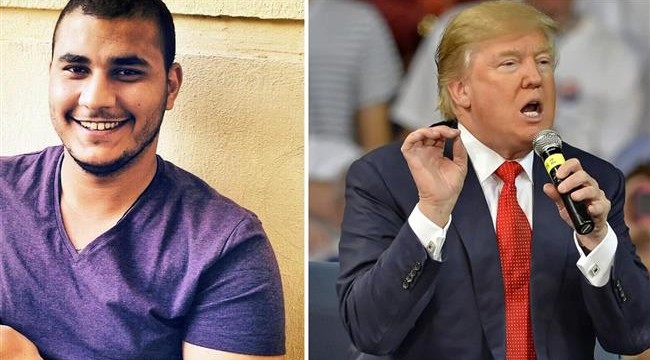 Egyptian student to be deported from US over Trump threat

An Egyptian student in the US state of California is facing deportation after threatening on Facebook to kill US Republican presidential candidate Donald Trump.

On February 12,  Emadeldin Elsayed, aged 23, was apprehended by US federal agents at the Los Angeles-area flight school where he was attending after posting a death threat against Trump.

“I am willing to kill Donald Trump and serve a life sentence. The whole world would thank me for doing that,” Elsayed wrote on his Facebook page, according to his attorney Hani Bushra.

Bushra said on Thursday his client had shown poor judgment in his Facebook posting and he by no means meant to harm Trump and regretted his actions.

Authorities did not file any criminal charges against Elsayed but an immigration judge earlier this week ordered his deportation on condition that the flight school had terminated his enrollment and as such his student visa was no longer valid.

“He is just a kid who did something stupid,” attorney said. “This was more angry rhetoric similar to rhetoric that perhaps is even used by Mr Donald Trump himself when he says things like we are going to kill the family members of terrorists and their children and their wives,”

Bushra added Elsayed’s Facebook message was in response to Trump’s anti-Muslim rhetoric and was accompanied by an article on the issue.

“It was a foolish thing to do, given the (atmosphere) in the country right now,” he noted. “It was just an angry response.”

He said a hearing on the deportation proceedings is scheduled on Friday and that at this point, all his client wants is time to get his affairs in order before leaving the country.

“He has paid $41,000 in tuition and all he wants is some kind of reprieve to get his belongings, sell his car and talk to the school owner about getting reimbursed,” he said. “And then he just wants to leave the country.”

Trump has time and time again come under attack for incendiary rhetoric against Muslims, immigrants and other minorities in the US.

Anti-Islam rhetoric has also hit the US presidential election of 2016, with GOP candidate Donald Trump creating a furor in the country and around the world by proposing a “total and complete shutdown of Muslims” entering the US.

The billionaire real-estate mogul also called for a database to track Muslims across the United States, and said the US would have “absolutely no choice” but to close down mosques.