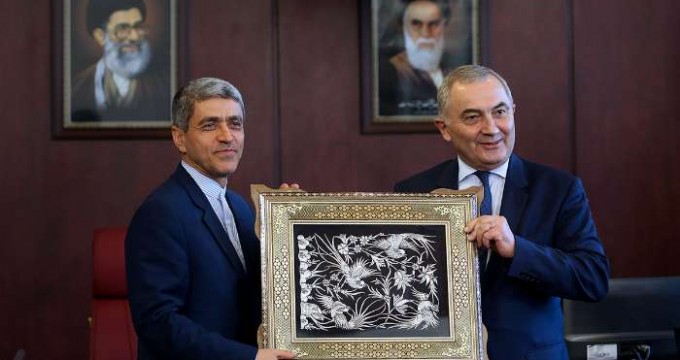 Tehran, March 2, IRNA – Economy Minister Ali Tayyebnia and Romanian Foreign Minister Lazar Comanescu in a meeting here on Wednesday called for the expansion of economic ties between the two countries up to the level of $3 billion.

‘Given the two countries’ high economic capacities, Iran and Romania are targeting the ceiling of $3 billion,’ Tayyebnia said.

The two sides explored avenues for the further expansion of economic and trade ties.

In a relevant development on Tuesday, Foreign Minister Mohammad Javad Zarif said that Iran-Romania Joint Economic Commission is due to convene in the near future after long recess of 12 years.

Zarif made the remarks in a meeting with his Romanian counterpart.

Zarif said that Iran-Romania Joint Economic Commission due to be held in Bucharest will draw up a roadmap for economic cooperation.

Iran and Romania had good relations in the past, but trade relations reduced over the past few years because of unfair sanctions imposed on Tehran, Zarif said.

He said that during the meeting between him and the Romanian foreign minister, they discussed different issues, including energy, banking, auto-industry, agriculture, tourism and Iran’s access to Europe through Black Sea.

The Romanian foreign minister said that his government is determined to resume cooperation with Tehran.

Comanescu referred to the transport corridor joining Iran to Europe through Black Sea as a strategic chance for Iranian companies to boost their international trade relations.

Noting that Iran and Romania can help improve stability and security in the two regions, he said that regional and international issues were discussed during the meeting between the two foreign ministers.