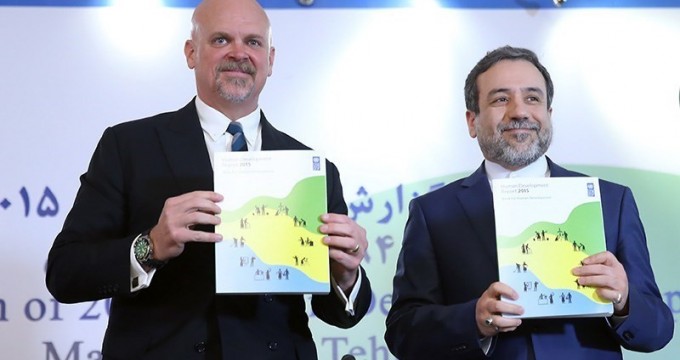 Iran moves up 6 ranks in Human Development Index in a single year: UNDP

According to the 2015 Human Development Report (HDR), The Islamic Republic of Iran’s Human Development Index (HDI) value for 2014 is currently 0.766.  This places Iran in the “high human development” category.  Its rank is 69th out of 188 countries and territories.

Iran’s HDI value for 2013 was 0.749 positioning the country at 75 out of 187 countries and territories.  Thus Iran has moved up six places in its HDI – this represents one of the highest increases for any country in the past 8 years.

An exhibition in which the work of UNDP projects were displayed

In his opening remarks Mr. Murali said: “Human Development Report was first published in 1990 – over 25 years ago […] HDRs have always generated dialogue and discussion on human development and devised a strategy to proceed towards sustainable human development.

”This new global HDR is an urgent call to tackle one of the world’s greatest development challenges – providing enough decent work and livelihoods for all.  The theme for this latest HDR is “Work for Human Development”.

”Mr. Lewis added: “Looking back even farther, between 1980 and 2014 Iran’s life expectancy at birth increased by 21.3 years, expected years of schooling increased by 5.9 years and the country’s Gross National Income per capita increased by 52.9%.”

Mr. Lewis pointed out that for the period, 1980-2014, Iran’s policy interventions – and actions including directing adequate resources – have produced significant improvements in its human development.  “This is no small achievement,” he said.

Today in Tehran, UNDP jointly with the Ministry of Foreign Affairs launched the 2015 HDR in the presence of 300 government officials, members of the diplomatic corps, academia, and the media

Dr. Araghchi also spoke at the event stating: “The Report is another testimony to the fact that things have worked out to some considerable extent even during some of the most difficult times for the Iranian economy.”

He added: “The three pillars are: long and healthy life, access to knowledge and decent standards of living.  This is certainly a source of pride that we have been able to raise the bar on many aspects of these three pillars of the Report.”

“Iran’s ability to promote health standards for its people, its achievement in expanding people’s reach to education to as far places and communities as possible, more inclusion of female students into the educational system, especially in higher education, and last but not least, the reduction of absolute poverty, are all but some ingredients of this phenomenal success, a success that is spoken through the figure making Iran the 69th country among 188 countries and territories, acquiring and HDI increase of 35 percent,” added Dr. Araghchi.

However, both Mr. Lewis and Dr. Araghchi also spoke about the areas in which more attention and work needs to be done, namely areas such as resolving the problem of unemployment, increasing the employment of more women, and removing more inequality in different layers of economy.

Following the speeches, Dr. Araghchi and Mr. Lewis formally launched the 2015 Human Development Report in Iran. During the event a new video highlighting the work of UNDP in Iran was screened and an guest were invited to visit an exhibition in which the work of UNDP projects were displayed.