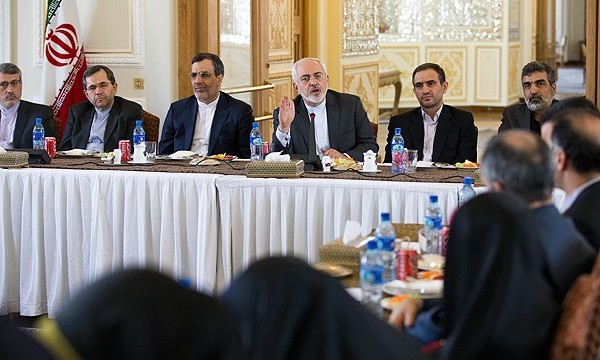 Iranian FM: Differences with US still in place

TEHRAN (FNA)- Iranian Foreign Minister Mohammad Javad Zarif said major differences between Tehran and Washington haven’t been settled yet, even after the nuclear deal was struck between Iran and the world powers.

“Our differences with the US have remained in place. They have not been resolved yet,” Zarif told reporters in Tehran on Wednesday.

He referred to the July nuclear agreement between Iran and the Group 5+1 (the US, Russia, China, Britain and France plus Germany), and said, “We are monitoring the other parties’ undertakings with great caution. However, this is not about nitpicking.”

In relevant remarks last January, Iranian Parliament Speaker Ali Larijani warned the US officials against making any improper and deceptive move against Tehran under the nuclear agreement, stressing that they should wait for Tehran’s tough response otherwise.

“Based on the rules and after the nuclear agreement, the sanctions will be removed in the next few weeks; although certain naïve remarks are heard which, of course, will receive a response,” Larijani said.

He addressed the American statesmen, and said, “Iran monitors your actions, and any of your improper measures will be reciprocated with Iran’s proper measures.”

Larijani reiterated Iran’s commitment to its undertakings based on the nuclear agreement clinched with the world powers in July, and said, “Yet, Iran will give a response to deception.”

His remarks came in reaction to the US Treasury Department’s announcement two months ago that it is preparing sanctions on two Iran-linked networks helping develop the missile program.