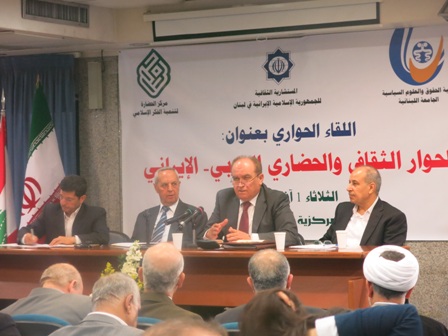 Tehran, March 2, The Iran Project – The participants in the sessions of the third congress on Iranian-Arab civilization and cultural dialogue investigated the common concerns and the theoretical principles of Iran-Arabs ties, stressing on resolving of the mutual concerns.

The third congress on Iranian-Arab civilization and cultural dialogue which was initiated jointly by Iran’s Cultural Attache to Lebanon, the Law and Politics Faculty of the National University of Lebanon and the Center of Civilization for the Development of Islamic Thought was held on Tuesday in Lebanon.

Hessameddin Ashena, Iran President’s Cultural Adviser, Adnan as-Sayyed Hasan, the president of the University of Lebanon, and Mehdi Shariatmadar, Iran’s Cultural Attache’ to Lebanon were reportedly among the keynote speakers of this one-day congress which hosted cultural officials of Iran, Lebanon, Syrian, Egypt and Jordan.

The participants in the expertise meetings investigated the historical grounds of the common concerns and the theoretical basis of Iran-Arab nations’ ties, demanding the removal of these common concerns.

The cultural initiatives such as translation of cultural books either in Persian or Arabic, promotion of two languages among ordinary people and not necessarily among elites and the enhancement of religious ties among Shia and Sunni people also were referred by the speakers as the steps to boost proximity among Muslim nations.

The third congress on Iranian-Arab civilization and cultural dialogue was reportedly closed on Tuesday night.