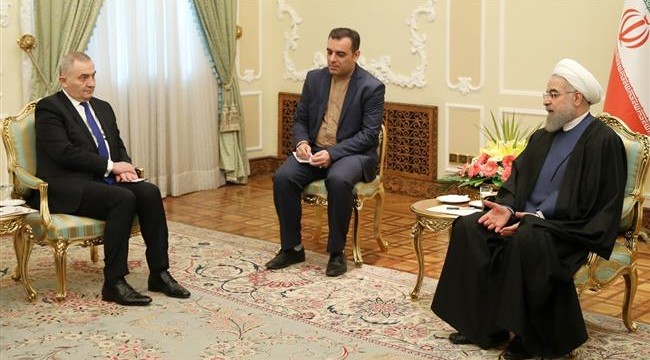 Iranian President Hassan Rouhani urges the opening of a new chapter in enhanced relations with Romania in all sectors in the shortest possible time.

“Tehran and Bucharest should open a new… chapter in the strengthening of relations and political, economic, cultural and regional cooperation,” Rouhani said in a meeting with Romania’s Foreign Minister Lazar Comanescu in Tehran on Tuesday.

He added that the two countries should make further efforts to increase the level of cooperation and economic exchanges given their potentialities in different economic sectors including energy and industries.

Rouhani noted that state and private sectors of Iran and Romania should make use of “very good opportunities” to improve cooperation.

He also stressed the importance of bolstering cultural, academic and tourist cooperation, saying, “The two countries’ universities and research centers can improve the level of their cooperation by implementing joint projects.”

The Iranian president also warned against the danger of terrorism spillover to the region and the entire world.

“Terrorism is a global problem and fight against it requires cooperation between all world countries in the domain of intelligence, culture, politics and security,” Rouhani pointed out.

Comanescu said his country is determined to strengthen political, economic, cultural and scientific cooperation with Iran.

He added that Romania and the European Union are aware of Iran’s very important and influential role in the region.

Bucharest is keen to exchange views with Tehran on ongoing developments in the Middle East, he said and added that bilateral cooperation can be instrumental in regional stability and anti-terror fight.

Heading a high-ranking politico-economic delegation, Comanescu arrived in Tehran on Monday for a three-day visit to hold talks with Iranian officials on ways to expand relations.

Earlier on Tuesday, he held a meeting and attended a joint press conference with Iranian Foreign Minister Mohammad Javad Zarif.

The Romanian foreign minister’s visit comes in a series of visits by world leaders to Tehran after the coming into force of a nuclear agreement, dubbed the Joint Comprehensive Plan of Action (JCPOA), which was reached between Iran and the P5+1 group of countries in July 2015.

Iran and the five permanent members of the UN Security Council – the United States, France, Britain, China and Russia – plus Germany started to implement the JCPOA on January 16.

After the JCPOA went into effect, all nuclear-related sanctions imposed on Iran by the European Union, the Security Council and the US were lifted. Iran, in return, has put some limitations on its nuclear activities.

The nuclear agreement was signed on July 14, 2015 following two and a half years of intensive talks.