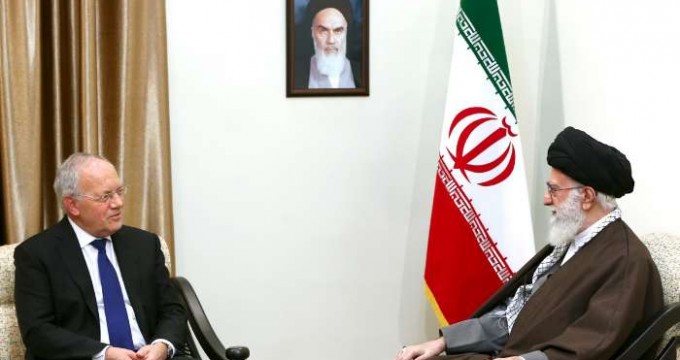 Speaking in a meeting with Swiss President Johann Schneider-Ammann in Tehran on Saturday, the Leader said Bern’s refusal to go along with certain Western governments in exerting pressures and imposing sanctions on Iran is among the appropriate cultural grounds for promotion of bilateral collaborations.

Iranian President Hassan Rouhani was also present at the meeting.

“We have known Switzerland as a center of peace, friendship and cooperation,” Ayatollah Khamenei said. “Some (other) European countries, however, are not so and their interests lie in waging wars and creating rifts.”

The Leader referred to the Iranian people’s negative attitude about some European governments that delivered missiles and warplanes to the Saddam Hussein regime during the 1980-1988 Iraqi-imposed war on the Islamic Republic
and noted that Iranians have no such attitude toward Switzerland.

Ayatollah Khamenei further welcomed the development of economic and scientific cooperation between Iran and Switzerland and, describing the volume of bilateral as “little and imbalanced”, said Swiss traders and investors can improve the balance by learning about Iran’s ample capacities.

He noted that during his visit to Tehran, talks were held with Iranian officials on drawing up a road-map for expansion of bilateral cooperation.

Elsewhere, the Swiss president referred to the big challenges facing today’s world, saying that the extent of the challenges and instabilities has reached European countries, including Switzerland, and that cooperation is need for resolving them.

His trip marks the first-ever visit to Iran by a Swiss president.

The visit follows the implementation of the Joint Comprehensive Plan of Action (JCPOA), a lasting nuclear deal between Iran and the Group 5+1 (Russia, China, the US, Britain, France and Germany).

There has been growing enthusiasm for closer ties with Iran after the JCPOA took effect on January 16, terminating all nuclear-related sanctions against Iran.