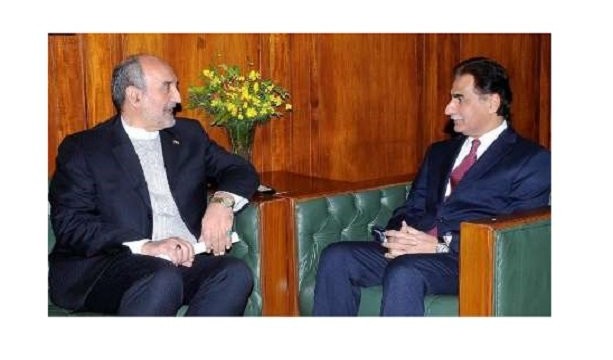 Sardar Ayaz Sadiq in a meeting with Mehdi Honardoost in Islamabad on Tuesday, deemed Iran’s geo-political position significant, saying the Islamic Republic’s role was central to unifying the Muslim world.

He went on to add that pro-active parliamentary diplomacy was necessary to promote further cooperation amongst the Muslim countries.

He also underlined the need for expansion of trade, parliamentary and economic ties in the wake of the lifting of sanctions that would pave a way for revival of economic and commercial relationship between the two countries.

Iranian Ambassador Mehdi Honardoost, for his part, discussed the latest developments in post-sanction Iran and announced various countries’ keen interest and readiness to expand trade and economic cooperation with Iran, especially in the energy sector.

He also assured the Speaker National Assembly that Iran was committed to assist Pakistan in resolving its energy crisis, stressing that Iran attached immense importance to its relations with Pakistan.

On Friday, Pakistan issued a statement on the official lifting of sanctions on Iran, reviving economic relationship between the two neighboring countries in several areas of trade, investment, technology, banking, finance and energy.