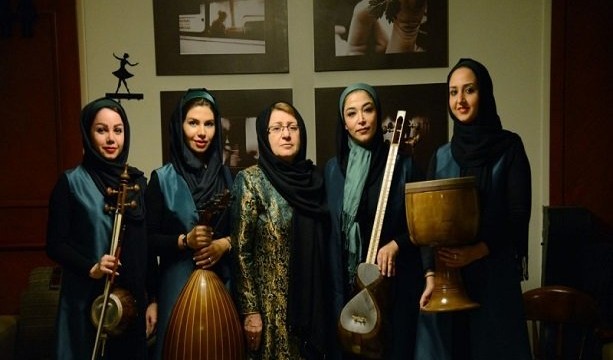 The 31st Fajr International Music Festival as Iran’s most prestigious music festival kicked off on February 10 with three performances at the Vahdat Hall, two of which were an all-women concert.

The 750-seat opera house, almost jam-packed, was host to the most famous female singer of Iran’s classic songs, Hengameh Akhavan, who is also known as ‘Lady Qamar’ for her covers of the works by Ghamar-ol-molouk Vaziri, the first professional Iranian female singer whose works were recorded on gramophone disks.

Akhavan led an all-women ensemble on Wednesday that comprised Azadeh Amiri on the Tar (6-string lute), Shima Boloukifar on the Kamancheh (stringed instrument similar to violin), Nazanin Pedarsani on the Tonbak (goblet drum), Marjan Ravand on the Oud (similar to the lute), and Sheida Ghazi on the Ney (end-blown flute), all various types of Persian traditional musical instruments.

Akhavan who was participating in Fajr festival after years of absence from this music event, performed works by famous classical musicians such as Ali Akbar Shahnaz, Amir Jahed, Morteza Neidavoud, Adib Khansari, Reza Mahjoubi, Aref Ghazvini and Mousa Marufi. But perhaps, her rendition of ‘Morgh-e Sahar’ (‘Bird of Dawn’) – a famous Iranian Tasnif [1] composed by Morteza Neydavoud and Mohammad-Taqi Bahar in early 20th century – was met with the most enthusiasm from the audience as it is a song quite well-known even to someone with the least knowledge or interest in Persian classical music. The song which deals with political and social issues written by Bahar during the furor of Persian Constitutional Revolution was first recorded by Moluk Zarrabi and then performed by numerous Iranian singers including Qamar-ol-Moluk Vaziri.

The performance Akhavan and her women ensemble put on stage on Feb. 10 featured two sections: the first part included Afshari avaz belonging to Shur dastgah, with plaintive and gloomy melodies yet very pleasing to the ears; and, the second on Bayat-e Isfahan belonging to Homayoun dastgah, with sometimes happy sometimes plaintive melodies, coming together in a brooding kind of hymn.

But all the informative facts aside, the performance of a female singer on an Iranian stage is quite a rare and special occasion. As women are not allowed to have their singing voices heard by men who are not their immediate relatives. They can however, perform in front of an all-woman audience – as was the case with Akhavan’s performance on the first day of Fajr festival – or provide back vocals for male singers in certain cases. But despite the limitations, Ms. Akhavan brought on the stage a powerful, beautiful performance that touched the hearts of some 800 people there who applauded the ensemble even while the piece was still being performed and sang along to the songs with which they were most familiar.

Akhvan who is currently working in the Ministry of Culture as a music expert and also gives singing lessons to interested women, believes that compared to a few years ago, women in Iran are now more comfortable to take part in music activities.

“At present, there are many music academies for women and interested people from all walks of life are able to learn how to sing and play all types of musical instruments without any restriction,” she said, while noting that the only limitation is the lack of adequate space for the teaching the large number of women who are interested in singing, as there is sometimes “not enough space for new students in my classes.”

Iran’s ‘second Ghamar’ as described by Iranian vocalist and Master of Persian Vocal Radif [2] Nasrollah Nasehpoor, has actually an optimistic view on the future of female singers and musicians performing in Iran; “limits have been removed to a large extent. 20 years ago, as I remember, women had many difficulties in holding concerts. Gradually though, the obstacles started to fade away and women, at least in the capital, have gained more room to express themselves via the music they create.”

As it stands, the Ministry of Culture and Islamic Guidance shows more lenience toward female singers performing solo in Tehran than Governors Generals offices do in other provinces. In fact, Iran’s current Minister of Culture Ali Jannati had made a comment in 2013 somehow in favor of women singing in public as “some religious authorities have said that so long as solo singing by women does not lead to corruption, it is admissible.”

Akhavan believes, however, the main problem for women concerts in Tehran is “shortage of appropriate spaces.”

“For instance, you should book Vahdat Hall one year ahead of the date of the concert or often the halls are used for theater performances rather than concerts. The same problem made us hold most of our performances at Niavaran Cultural Center which makes it a bit difficult for women to commute at night,” said Akhavan.

This may be the case. As of now, most women performances are held at Vahdat Hall, and the place is always the scene to one cultural event or another. You can barely find a day on which the ‘opera house’ is not being used for a musical performance, a theater stage, opening or closing ceremonies of some national or international event. And even when women ensembles find an opportunity to perform, Vahdat Hall has to become fully reserved for female audience only. The male staff all have to step back and no photographers are allowed inside as the musicians perform without hijab. This is actually quite refreshing, to be a part of an all-women community for one or two hours, where virtuoso musicians create beautiful melodies and show despite all limitations, sanctions and lost opportunities, Iranian women can reach the level of mastery in arts just the same as their male counterparts, if not more so.

The 31st edition of Fajr Music Festival came to a close on February 19, 2016, after a ten-day showcasing of the best of national and international musical pieces and promoting the arts and culture of Iran inside and outside the borders.