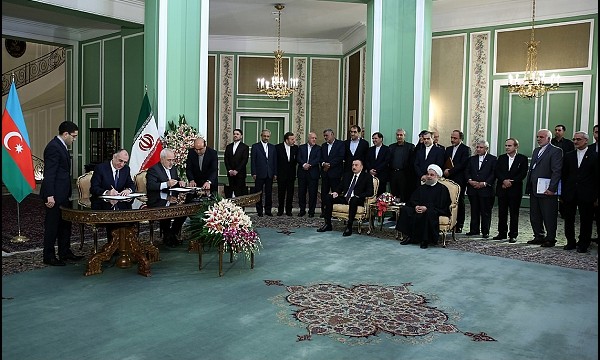 TEHRAN (Tasnim) – In a high-profile ceremony in Tehran on Tuesday, senior officials from Iran and the Republic of Azerbaijan signed eleven Memoranda of Understanding (MoUs) and agreements to promote mutual cooperation in a range of fields.

The ceremony was attended by Iranian President Hassan Rouhani and his Azeri counterpart Ilham Aliyev, who arrived in Tehran earlier in the day on an official visit.

Cabinet ministers and senior officials from the two neighboring countries signed the agreements.

Before the ceremony, President Rouhani and Aliyev discussed the expansion of economic ties between Tehran and Baku in a meeting.

This is Aliyev’s second visit to Iran during President Rouhani’s tenure. The first was in spring 2014.

Iran and Azerbaijan have accelerated efforts in recent years to forge closer partnership in various fields, from fighting against terrorism to the exchange of electricity or gas deals.

Meanwhile, a lasting nuclear deal between Iran and six world powers that terminated sanctions on Iran has also paved the way for Tehran-Baku interaction to thrive.

Known as the Joint Comprehensive Plan of Action (JCPOA), the nuclear accord came into force on January 16.