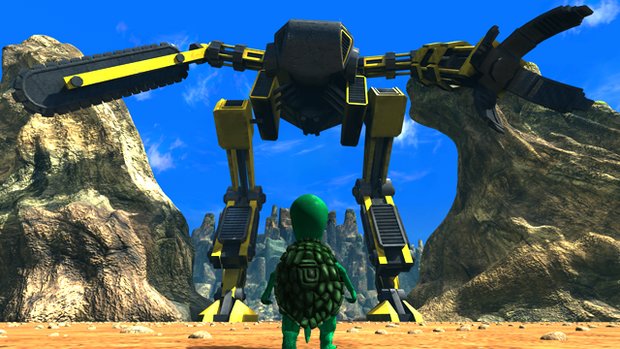 The action takes place in an imaginary territory of animals, including turtles, lizards, snakes and hippopotamus.

A turtle named Lucky has an unusual and big head making him separated from his fellowmen living in a pond. Lucky, the Iron Head character of the film, tries to overcome his problem with the help of technology.

He is intelligent and tries to create a device for flight and use while their place is endengered by the two enemies Nish and Dr. Mole, expelled from the pond due to their hostile behavior towards other animals of the pond.

Meanwhile, the greed of the old lizard Dr. Mole to reach a diamond in the pond and provocative words of Nish seeking revenge from the hippos who expelled them from the pond, wages an imminent war against the animals of the pond using technology and giant robots made by old Mole.

Iron Head is an action movie using high tecniques in drawings of the characters and especially the lighting, the animal characters which are portrayed in an interesting method and the story plot apealing to teenagers and youth.

The story is different, using a different message. The movie never gets boring, and the story keeps you interested. The movie is full of great moments, but the best is the climactic finale – absolutely unforgettable, when the animals of the pond fire cannon towards the giant warrior robots of Dr. Mole and destroy them.

There are numerous animation techniques mixed together; using computer CG software to create animated movies by a 3D animation motion graphics techniquesin, utilizing 100% computer-generated imagery, a plot centering on an eclectic mixture of horror, action, science fiction, war scenes, challenge, conflict between good and evil and conveying a moral message that good is always the winner, are among features making the work more conspicuous in the field of animated films, Iron Head producer Erfan Lolaki told in an exclusive interview with Mehr News.

He added all the characters and the space of the movie are designed and modeled by Maya Application. For the texture, “we used Mudbox and Photoshop with ndynamic for special effects,” he said.

What makes this animation different is bringing young talented Iranian experts and veteran masters of animation art in a team together, made possible by the help of private sector’s investment and without the help of state institutions and agencies in charge of the production of films and animated movies.

Cooperation with dubbing manager Khosrow Khosrowshahi is definitely a turning point for the the cinematic work Iron Head.

We could make a movie with the cost of Iron Head, Lolaki said, however he noted his team seeks growth and development of the art of animation and producing animated feature films which are rarely addressed in the Iranian Film Industry.

The team has used completely an Iranian animated engine designed for the project which well operates in the speed of processing, he said.

The 80-miniute movie, Iron Head, maybe experiencing some kinds of weak points, yet it is a good work trying to fill in the gaps in Iran’s cinema in the area of animation. The movie is expected to pave the way for the production of more feature animated films.

There are a few times when the movie slows down, but one has to admit that it has one of the most catching opening sequences.

But what’s best and most refreshing about this film is its moral message which says, “people are over-indulging themselves in technology to the degree that they are losing themselves.”