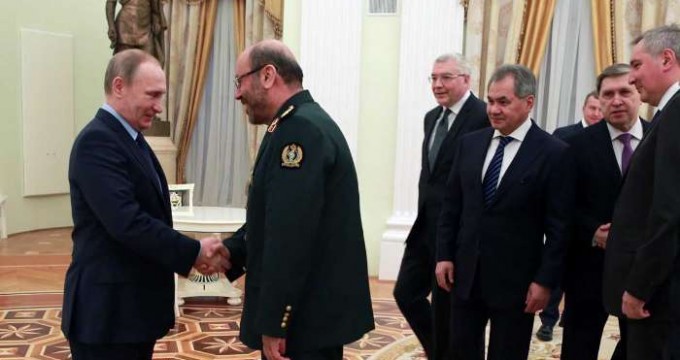 TEHRAN, Feb. 17 (MNA) – Russian President Vladimir Putin in a Tue. meeting with Iran’s Defense Minister Dehghan expressed his satisfaction over the expansion of defense and security cooperation between Tehran and Moscow.

Iran’s Defense Minister Brigadier General Hossein Dehghan who arrived in Moscow on Monday for an official visit at the invitation of his Russian counterpart Sergey Shoigu, held talks with President Putin on Tuesday over bilateral, regional and international issues.

During the meeting which lasted over an hour, Putin deemed the expansion of defense and security cooperation between Tehran and Moscow a ‘natural and inevitable’ fact in line with the two countries’ interests, and stressed the continuation of cooperation within the framework of signed bilateral agreements.

The Russian President welcomed Iran’s presence in global markets as the Islamic Republic’s ‘natural right’ following the implementation of the nuclear deal and called for the stabilization of Iran’s position in the world.

Brig. Gen. Dehghan, for his part, extended the warm greetings of the Leader of the Islamic Revolution and Iranian President to Putin, and evaluated Iran-Russia’s defense and security relations as ‘very good and constructive’; “Tehran-Moscow ties are strategic and long-term,” he said.

The Iranian defense minister further lauded Putin’s effective and crucial decisions in helping with the resolution of complicated crises in the region, saying “it is imperative for us to have close, coordinated cooperation on eradicating terrorism in the region.”

He went on to add that Iran-Russia’s deep and all-inclusive relations could serve as a good model for regional cooperation.

Earlier on Tuesday, Dehghan also held talks with Russia’s Deputy Prime Minister Dmitry Rogozin, who is in charge of defense and space industry, and stressed the expansion of Tehran-Moscow ties in defense and security as an ‘important factor in establishing peace, stability and security’ in the region.

The two officials further deemed significant Iran-Russia’s cooperation in regional and international scenes, highlighting the need for a definitive and comprehensive fight against Takfiri-terrorist groups.