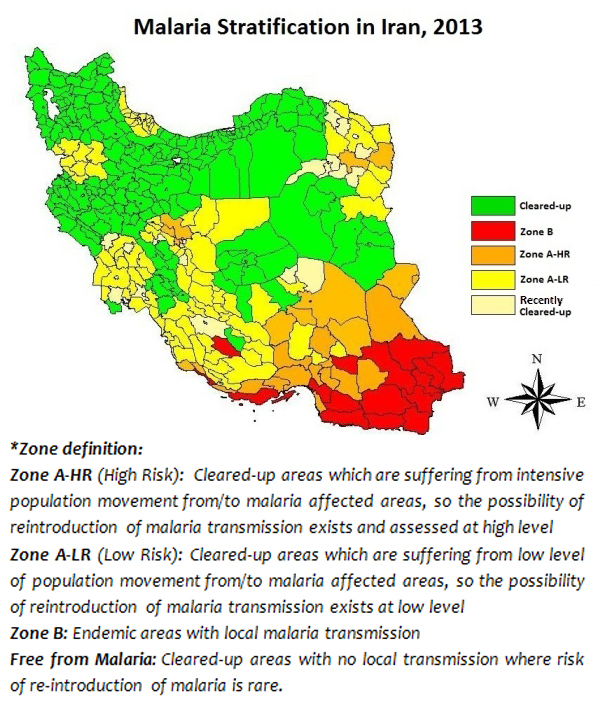 Iran has entered the malaria elimination phase, said Muhammad Mehdi Gouya, director general of communicable diseases at the Center for Disease Control and Prevention affiliated to the Health Ministry.

“The country has taken great strides in eliminating the disease and is one step closer to being declared malaria-free which will be a huge international success,” he told IRNA.

Malaria is a mosquito-borne disease caused by a parasite. People with malaria often experience fever, chills, and flu-like illness. Left untreated, they may develop severe complications and even die.

A declining trend has been noted in the number of malaria cases in Iran in the past few years, and in 2009, the World Health Organization (WHO) malaria report announced Iran was in the pre-elimination phase.

Other countries in the elimination phase include Azerbaijan, Oman, Georgia, Turkey, Uzbekistan and Kyrgyzstan.

“Iran’s long border with malaria-endemic countries Pakistan and Afghanistan is a big challenge and travelers to and fro could carry the virus every year,” Gouya noted.
Therefore, despite the reduction of malaria cases in recent years the risk of reintroduction is high.

Gouya said the 10-year National Strategic Plan for elimination of malaria, launched in 2010 as part of the 2025 Vision Plan, has set goals to reduce local malaria transmission and continue to prevent malaria deaths in targeted districts though early diagnosis, prompt and effective treatment, and vector control through indoor residual spraying (IRS) and distribution of long-lasting insecticide-treated nets, in addition to establishing a malaria early warning system for controlling malaria epidemics.

Over 33 million people have benefitted so far directly or indirectly from the current phase of the project covering 11 provinces in the country.
Through these efforts, Iran aims to check the disease and become malaria-free by 2025.

Steep Decline
The Health Ministry’s most recent malaria report indicates that local malaria cases have fallen from 5,594 in 2008 to 366 in 2014, a 94% reduction in six years.
The number of cases has dropped to below 10 in southern Kerman Province, where the disease is in the last stages of elimination. In the southern Hormozgan Province the cases are below 50 a year.

A Global Fund grant in 2011 helped Iran to develop a malaria early warning system and epidemic preparedness plan to improve awareness in targeted areas by increasing training of microscopists, rural malaria mobile teams, and community volunteers. With only 1,847 cases reported in 2010 and continued cross-border collaborations with endemic neighbors, Iran has been developing the necessary strategies to reach elimination.

The sharpest drop in the number of cases to below 500 has been noted in Sistan-Baluchistan Province, which borders Pakistan and Afghanistan. In the year 2003, nearly 64% of all of Iran’s malaria cases were from this province.

“Being declared malaria-free would be a huge leap not only for Iran, but for the entire world, and the progress is being closely monitored by the WHO,” the official said.

In all, 33 countries and territories have been certified in the WHO official register as having eliminated malaria with specific measures. The most recent additions are the United Arab Emirates (2007), Morocco (2010), Turkmenistan (2010) and Armenia (2011).

In 2013, an estimated 198 million cases of malaria occurred worldwide and half a million people died, mostly children in Africa. About 1,500 cases of malaria are diagnosed in the United States each year. The vast majority of cases in the US are travelers and immigrants returning from countries where malaria transmission occurs, many from sub-Saharan Africa and South Asia.