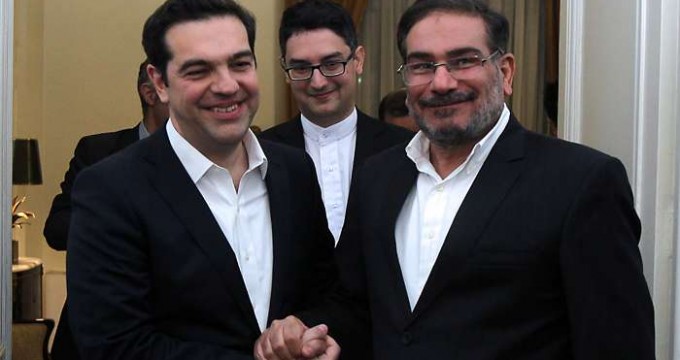 Involvement in Syria by some countries of ‘dire consequences’

TEHRAN, Feb. 08 (MNA) – Secretary of the SNSC has told Greek PM deployment of military in Syria without Syrian government official request and consent would lead to dire consequences.

Ali Shamkhani met with Greek PM Alexis Tsipras on Monday evening after his meeting with the Leader of the Islamic Revolution. Mr. Tsipras is visiting Tehran along with a delegation.

Shamkhani believed that both countries would grasp the opportunities provided by implementation of JCPOA and to engage in more constructive relations including in energy, tourism, and shipping; “Greece, as an EU member state could play a significant role as an effective watching country over EU members of 5+1 in their commitment to JCPOA obligations,” Mr. Shamkhani told Greek PM. “Greece is on the frontlines of the migrant crisis which begins in Syria and Iraq, and clearly feels the calamities and consequences of inaccurate policies of some countries in the region and their western allies in fully supporting terrorism.”

Shamkhani deemed sending military to Syria a grave miscalculation which would have dire consequences; “any deployment to Syria of military ground forces which has not any official permits and consent of Syrian government would be seen as unwanted for intervention and would backlash, with probable impacts being fully fathomable,” he emphasized.

“After 4 years of devastating war, sending troops to support would be returning back to the status quo ante and to undermine all efforts directed to solving the ongoing crisis,” said the Leader’s representative to Supreme National Security Council. He also denounced double standards in addressing terrorism; “Syria does not have any military solution and peace would embrace the country if all Syrian sides sat in negotiation table to make possible Syrian nation’s collective will.”

Greek Prime Minister Alexis Tsipras for his part, pointed to Iran-Greece historic ties and cooperation in war and peace; “we welcome and actually work to improve economic ties and use capacities in bilateral trade; Greece did oppose resolutions on human rights issue in Syria as a demonstration of our independent policy and an understanding of the development and critical situation in Syria peculiar to Greece,” he told Shamkhani.