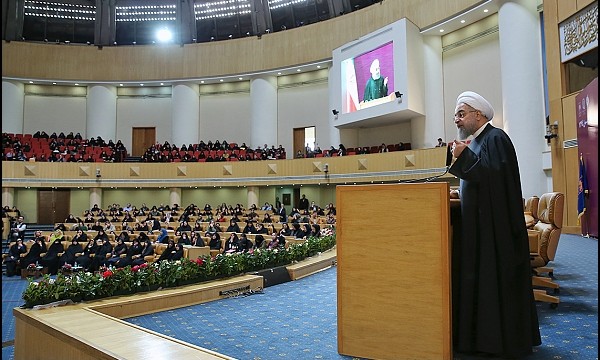 Rouhani urges all to take part in votes under any circumstances

Tehran, Feb 7, IRNA – President Hassan Rouhani urged the nation to take part in the upcoming elections in Iran under any circumstances.

Addressing a gathering on women, development and moderation here Sunday, the President regretted that the country was presently suffering from extremism from both ends.

He said extremism takes its roots not from violence but from minds.

The President further noted that many of the problems in the present world are also rooted in extremism because certain people know nothing but extremist practices.

Turning to 26 February elections in Iran, President Rouhani urged the nation to go to the ballot boxes under any conditions.

Saying that people should be quite vigilant now at the threshold of elections, he added he is quite aware of the problems and shortcomings the country is facing but is thinking of long-term goals.

The national conference on “Women, moderation and development” opened here on Sunday with participation of a number of wives of cabinet ministers, wives of martyrs and ministers.