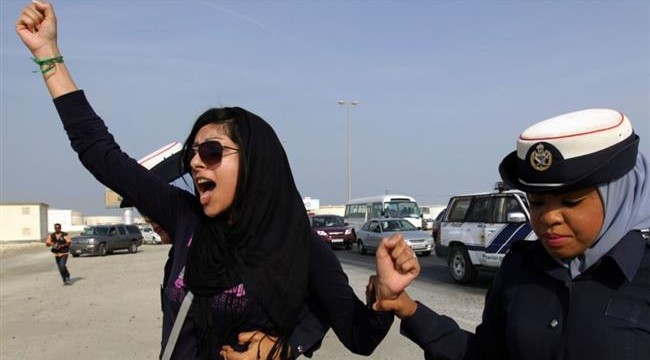 The Bahrain Center for Human Rights (BCHR) announced in a statement on Saturday that Bahraini authorities are deliberately singling out female rights defenders to take revenge and also force them into stopping their campaign.

It further called for the immediate release of all female activists currently being held in Bahraini jails.

The report comes as a court of appeals recently upheld a nine-month jail term for Bahraini activist Zainab al-Khawaja. She is accused of insulting the Al Khalifa regime’s police forces.

Zainab’s father, Abdulhadi, is currently serving a life sentence for allegedly plotting to overthrow the kingdom.

Ghada Jamsheer, another female rights activist, has also been sentenced to four months in prison over insulting two government employees on Twitter.

On February 3, 2016, Bahraini officials arrested female rights activist, Massouma al-Sayed, at a checkpoint over a previous verdict sentencing her to six months in prison over participation in an anti-regime rally.

She was later released on bail, but told that she will continue to be detained over different charges of terrorism, rioting and organizing anti-regime protests.

The BCHR also called upon the Al Khalifa regime to put an end to its campaign of targeting rights activists and political dissidents.

Since mid-February 2011, thousands of anti-regime protesters have held numerous demonstrations on an almost daily basis in the kingdom, calling for the Al Khalifa family to relinquish power.

Scores of people have been killed and hundreds of others injured or arrested in the ongoing heavy-handed crackdown on peaceful rallies.

Amnesty International and other rights groups have repeatedly censured the Bahraini regime over the “rampant” human rights abuses against opposition activists and anti-government protesters.