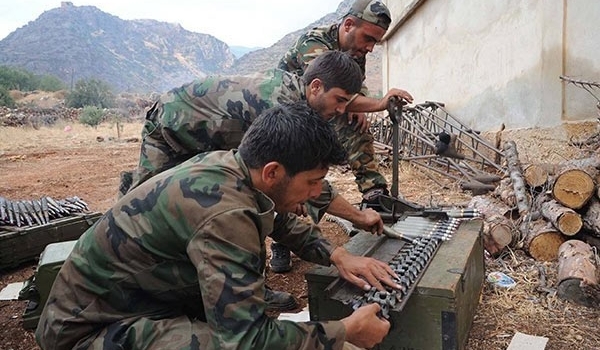 Militants in Syria’s Aleppo on verge of defeat: Analysts

Analysts say major militant groups are on the verge of total collapse in Syria’s strategic Aleppo province in the face of army advances.

Aleppo is the second Syrian city in a province bordering Turkey, which has served as a major gateway for transit of new militant recruits and weapons.

“The downward slope (for the militants) is increasingly steep,” said Emile Hokayem, senior fellow at the International Institute for Strategic Studies, told the AFP news agency on Saturday.

Syrian army offensives have recently choked up militant supply lines from Turkey, a longtime supporter of Takfiri groups fighting to topple the government.

With the recent gains, Syrian soldiers and allied fighters have almost encircled militant-held parts of Aleppo, located some 50 kilometers (30 miles) from the Turkish border.

Most of Aleppo’s eastern neighborhoods are now controlled by government forces and their allies. Takfiri groups, including Ahrar al-Sham and al-Qaeda-affiliated al-Nusra Front, along with smaller militant outfits, are mainly active in the western parts of the city.

Aleppo’s liberation would mark one of the major defeats for the militants groups fighting there over the past five years.

Faysal Itani, a senior fellow at the Atlantic Council’s Rafiq Hariri Center for the Middle East, said many of the militant “will be killed or forced to surrender.”

“Aleppo is simply the first dramatic display of how the combination of Russian airpower and advisers” has been duly bolstering the government’s fight, he added.

“It is a turning point in the war,” said Fabrice Balanche, a visiting fellow at the Washington Institute think tank, adding the liberation of Aleppo would deal a serious blow to militant ambitions.

Militants “wanted to make Aleppo and (neighboring) Idlib province the base of a ‘free Syria.’ That’s over,” he told AFP.

Reports have, meanwhile, pointed to a decline in arms supplies to militant groups by their Western and regional backers.

Activist Maamoun al-Khatib, the head of the Shabha press agency in Aleppo, called it the main source of frustration among the terrorists.

Hokayem said foreign-backed militants had a feeling of betrayal, which may encourage some to join the ranks of Takfiri groups such as the al-Qaeda-affiliated al-Nusra Front and Daesh.

The West and its regional allies have been supporting the militants for years because they view them as “moderate,” but some of the fighters have ended up joining Daesh and other violent groups.

Russian airstrikes at the request of the Syrian government have proved a potent mix to the army’s successful military bouts with the help of Lebanon’s Hezbollah in dislodging Takfiris from some of their bases and exterminating them.

On Thursday, US newspaper Military Times quoted an unnamed US defense official as saying that Daesh, which has been wreaking havoc in Syria and Iraq since 2014, was shrinking in size in the conflict-stricken countries.

Citing a new intelligence estimate, the official said the group had now between 19,000 and 25,000 members in the two countries, down from prior figures ranging from 20,000 to possibly more than 30,000.

The official, however, said the group was growing in Libya, where it controls the northern city of Sirte.

UN Secretary-General Ban Ki-moon likewise warned in a report on Friday that the group was expanding to other regions.

He said as of mid-December 2015, 34 militant groups from around the world have reportedly pledged allegiance to Daesh, which he called “the world’s wealthiest terrorist organization.”

Ban said Daesh poses “an unprecedented threat” because of its ability to persuade groups from countries like Libya, the Philippines, Uzbekistan, Pakistan, and Nigeria to pledge allegiance.