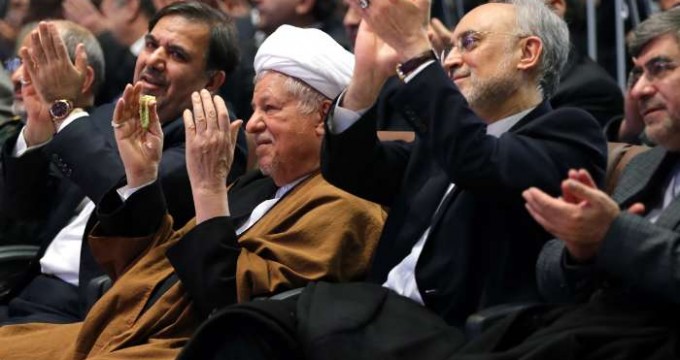 Rafsanjani’s controversial remarks on Iran’s elections cause a stir

On February 1, the former Iranian president Ayatollah Akbar Hashemi Rafsanjani directed harsh criticism at the country’s Guardian Council. He made his remarks in defense of Seyyed Hassan Khomeini, the grandson of Ayatollah Ruhollah Khomeini, the founder of the Islamic Republic. The Council had earlier excluded him from running for the upcoming Assembly of Experts election. His comments have drawn widespread attention from the Iranian media and news websites.

In the wake of the recent implementation of a nuclear deal between Tehran and world powers (known as the JCPOA), Iran finds itself at a critical juncture in its political history. The country is on the verge of a major evolution, especially in terms of its international ties. At the same time, political competition has escalated between the country’s conservatives and reformists, with an eye on gaining the most out of the upcoming Parliamentary and Assembly of Experts elections, which are due to be held on February 26.

Under such circumstances, it seems that the wisest politicians of both parties – particularly the reformists, who have bitter memories of the protests after Iran’s 2009 presidential elections and are still paying the price for ignoring the rules of the game – are not looking to increase the pressure generally in Iran’s atmosphere by aiming criticism at the Guardian Council’s views on candidates’ qualifications.

In recent days, senior officials within the moderate government of Hassan Rouhani, including the president himself – as well as prominent reformists like Mohammad Reza Aref – have expressed their criticism of and discontent with the Guardian Council’s disqualification of moderate and reformist candidates in a tone of moderate complaint at most. They have been voicing their criticism with soft and cautious words, mentioning their expectation of a review of the disqualification cases and their high hopes for the Council to reconsider its decisions.

In this atmosphere, Ayatollah Hashemi Rafsanjani’s remarks are clearly considered as being contrary to the cooperative approaches of the reformists, and have worried certain party figures. Certain reformists fear that such remarks and opinions in support of the disqualified candidates will only deepen the gaps instead of helping to resolve the issue, namely the disqualification of certain prominent figures, including the grandson of Imam Khomeini.

Ayatollah Hashemi Rafsanjani attacked the Guardian Council at a Monday ceremony marking the “Ten Days of Fajr (Dawn)”. This celebrates the 37th anniversary of the 1979 Islamic Revolution, when Imam Khomeini, the leader of the revolution, returned to the country after almost 15 years in exile.

The former Iranian president spoke out in protest at Seyyed Hassan Khomeini’s disqualification, saying “You [presumably the Guardian Council] have disqualified the person who is the most similar to Imam Khomeini. Where have you got your own qualifications from? Who has permitted you to judge? Who allowed you to take control of the parliament, the government, and other institutions? Who allowed you to have guns or to have an opinion? Who gave you this permission? If it was not for Imam Khomeini, his uprising, and the people’s will, you could not have had any of these. At a time when all of us should celebrate together [during the Fajr days], you gave Imam Khomeini’s family a poor gift.”

The remarks, however, drew reactions from several political figures and activists, from both the conservatives and the reformists.

Shariatmadari claims that Hashemi Rafsanjani had persuaded Seyyed Hassan Khomeini to register his name for the Assembly of Experts election, then later on, had encouraged him not to take the qualification test.

“Mr. Hashemi Rafsanjani is indebted to Imam Khomeini’s family in this case, because of a special scheme he has designed… Therefore, his recent remarks are solely aimed at switching his position from debtor to creditor. He has labeled the Guardian Council as indebted to the Imam’s family, instead of considering himself a debtor, and apologizing to Ayatollah Khomeini’s family.”

Another conservative, Mojtaba Zon-Noor, also demonstrated a harsh reaction to the remarks. He referred to Hashemi Rafsanjani’s comments as being aimed at spoiling the Islamic Establishment, Imam Khomeini’s descendants, and the values of the Revolution and revolutionary institutions.

“Imam Khomeini said the Guardian Council is the final arbiter, and if anyone defies the acts of the Council, he should be considered as a person who “spreads corruption on earth”, and should be prosecuted accordingly,” Zon-Noor said, stressing that Hashemi Rafsanjani deserves to be imprisoned.

“If the Islamic Establishment does not show mercy, such people [Hashemi] should be transferred to Evin Prison, where their sons are imprisoned,” he added.

The remarks were also condemned by reformists. Abbas Abdi, a prominent reformist journalist and activist, described Hashemi Rafsanjani’s argument for proving Hassan Khomeini’s qualification using his family relations as “hereditary, weak, irrelevant, and incorrect”. He stressed that the disqualification of Seyyed Hassan was wrong, and that he deserved to run in the elections; however, Abdi categorically rejected Hashemi Rafsanjani’s reasoning.

“Defending the claim [that Seyyed Hassan should have been permitted to run] has nothing to do with making appeals to his family roots or to the debt owed to Imam Khomeini and his family. This argument is not only weak and irrelevant, but also wrong. Whether he [Hashemi Rafsanjani] wishes to or not, his remarks contribute to the justification of Seyyed Hassan’s disqualification, and exacerbate the political tension. This is a hereditary logic, which runs counter to well-known cases.”

Abdi also lashed out at the reformists’ refusal to criticize Hashemi Rafsanjani over such remarks, calling them “wrong”.

“I think he [Hashemi Rafsanjani] preferred that Seyyed Hassan not be qualified to run for the elections, or else he is seeking to take all the credit, making others indebted to him if the Imam’s grandson is later approved… The reformists should not keep silent over such remarks, or even worse, welcome them. These remarks have nothing to do with reformist logic, and just legitimize the other side’s ideologies. Unfortunately, the blind – or perhaps inevitable – obedience of reformists to Mr. Hashemi’s plans is a consequence of the situation which they have created for themselves, one which is dangerous for the future of the country and for reformism.”

“I really don’t understand Mr. Hashemi Rafsanjani’s harsh criticism of the Guardian Council at this time. Right in the middle of consultation and dialogue, at a time when there is a dire need for accord in order to create a better future, and while many wish for the presence of Seyyed Hassan Khomeini and others in the Assembly of Experts and the parliament; at such a time, this sort of sharp, knee-jerk attack can only be to the detriment of the disqualified figures. This is not something that the politician Hashemi Rafsanjani does not know. Of course, such behaviour would work well within a populist framework, one in which Hashemi Rafsanjani takes all the credit for the votes of a popular figure like Seyyed Hassan.”

Reaction was much more widespread than merely the ones mentioned above. Although reformist newspapers tried not to embolden Hashemi Rafsanjani’s hereditary argument, such remarks cannot be concealed or censored. Much more reaction is expected in the coming days.

This article was translated by IFP from Alef News Website