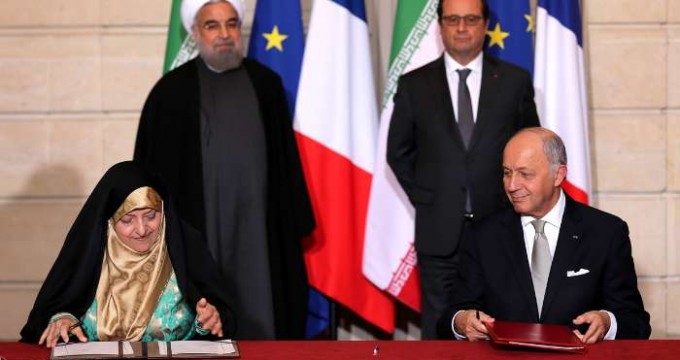 JCPOA implementation; 51 co-op agreements from East to West so far

Tehran, February 3, The Iran Project – JCPOA implementation and termination of sanctions soon provided a chance for other countries to enhance ties with Iran. Signing 51 cooperation agreements from East Asia to the heart of Europe in almost two weeks after the implementation due date proves how fast the diplomatic efforts of Iran’s policy makers have worked to enhance Iran’s re-engagement with the world countries.

Only few days after Iran passed its implementation day milestone, China President visited Iran, making him the first Chinese president to travel to Tehran since Jiang Zemin’s trip in 2002.

Later, Iran’s president Rouhani landmark tour to Italy and France following the official removal of sanctions which took place after more than a decade is also seen as a turning point in Iran contemporary diplomatic history.

It is no coincidence that President Xi Jinpign is the first world leader who met Iranian leaders after the implementation day for nuclear agreement.

As the second most powerful world economy and Iran’s close friend during the times of hardship, China moved quickly to capitalize on the deal to not miss any privileged position as European companies and Russia seek to enter Iran’s market.

Pursuing to found deeper economic and military ties, Beijing sought to form strategic relations with Tehran in the framework of a 25-year comprehensive document.

Moreover, with the Riyadh-Tehran recent tensions, China leadership approach to Iran, as the first official visitor to Tehran after the implementation day, signals their willing to deepen bilateral strategic ties irrespective of the regional disputes and rows.

Apart from this strategic partnership, agreement to increase trade ties to 600 billion dollars in ten years and signing 17 other documents are the most significant outcomes of the Chinese recent talks with Iranian officials.

Travel to heart of Europe after decade

President Rouhani’s landmark tour to the heart of Europe accelerated Iran’s engagement in the global equations. Iran’s President was welcomed with open arms in meeting with Italian leaders in Rome, inking dozens of contracts worth up to 17 billion dollars with Italy. He met the pope, the Italian prime minister and many business leaders, as well.

French President Francois Hollande also rolled out a red carpet to Iran’s president, seeking to take the chance to gain advantage in the face of growing competition from Europe and Asia to enter Iran’s market.

During the trip, many giant French industrial corporations such as Airbus, Peugeot and Total moved to sign agreements worth billions of USD without having to risk international approbation.

The recent rapprochement between Iran and China after the implementation day promises a quite brighter future for the ancient Silk Road. The Western inhuman sanctions against Iran were considered a real barrier ahead of the initiative of the Silk Road proposed by the Chinese government in 2014 for putting into effect.

Now the termination of UN and Western sanctions against Iran and removing all international restrictions should be utilized by Iran and China to promote the joint venture in order to diminish the US economic dominance in the region.

With uniquely positioned in the geographical map of the modern Silk Road, both Iran and China should take the effective and practical steps toward building Silk Road Economic Belt and marine Silk Road.