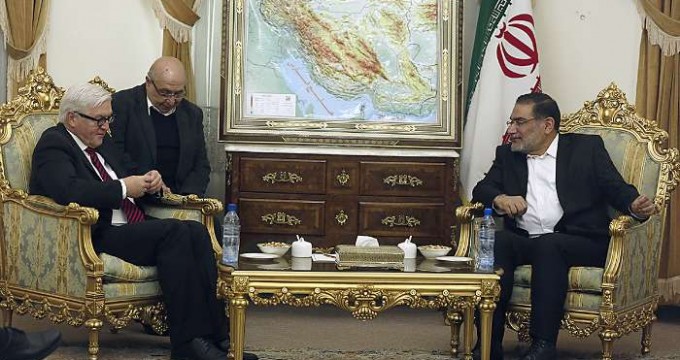 Iran seriously concerned about impact of US double-standards on N. deal

“Implementation of the nuclear deal and removal of sanctions is an important period for us to build confidence and mutual trust between Iran and the friendly western states,” Shamkhani said Wednesday in a meeting with German Foreign Minister Frank-Walter Steinmeier in Tehran.

“Despite the Islamic Republic’s goodwill gesture to fully implement the deal, and despite the constructive efforts on the part of certain European governments to speed up the process, the United States continues to adopt an ambigious and double-standard policy. It’s a source of serious concern,” he added.

Shamkhani underlined the need for Tehran and the EU to engage in constructive dialog as it could serve their common interests, adding that without crossing the red lines in politics, cutlure and economy, the two sides could open up a new chapter in ties.

Steinmeier, for his part, expressed the hope that relations and cooperation between Tehran and Berlin would go even further, while underlining Iran’s significant role in the region and the need to work together to resolve the ongoing tensions and insecurity in the region.

Shamkhani’s remarks came after the US Congress approved a bill in January which allows the Americans to claim Iranian funds in a case which is currently before the American Supreme Court. The hostile move came after Iran and the world powers reached a final agreement in Vienna on July 14 to end a 13-year-old nuclear standoff.

In a breach of the nuclear deal between Iran, the US, the EU, Russia and China, the Congress also passed a law affecting its Visa Waiver Program, which exempts nationals from 38 countries from having to obtain visas to visit the US but the American officials have promised to find a way to nullify the law.