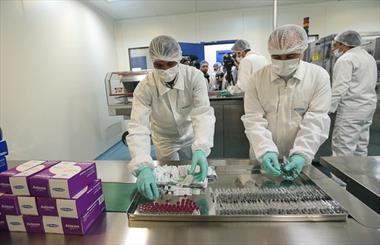 Tehran, February 3, The Iran Project – Minister of Health announces that Iran is proud of its self-sufficiency in all medical sections that have been achieved despite the economic pressure and cruel sanctions.

Seyed Hassan Ghazizadeh Hashemi, Iran’s Minister of Health and Medical Training made the remarks on the sidelines of the ceremony to inaugurate six medical projects in a hospital in Damghan, Semnan province. Noting the economic pressure and the sanctions imposed on Iran during the past years, he said that despite the difficulties Iran achieved the self-sufficiency in all medical sections

Referring to the supply 96% of the needs to medicine within the country, the Minister highlighted the giant steps jointly taken by both government and Iran’s Parliament in the area of healthcare.

Elsewhere in his remarks, he praised an Iranian benefactor for donating money to equip Damghan hospital, adding the donors ensure welfare for other people through their altruism.

Earlier on Tuesday, a deputy of Tehran University of Medical Science had announced that 22 new technology-based medicines that were produced by Iranian researchers will be unveiled soon.