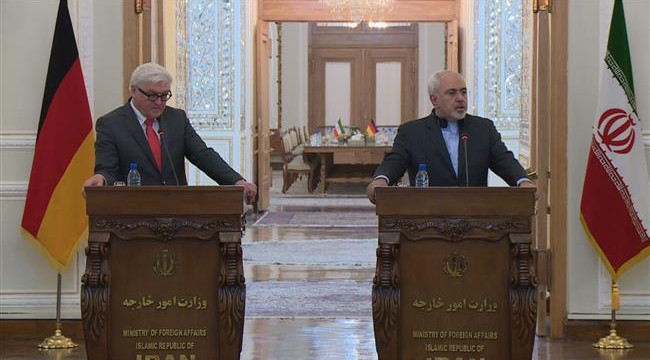 The Iranian foreign minister says Saudi Arabia must drop its hostile policies against the Islamic Republic.

“Saudi Arabia has been pursuing hostile policies against Iran. The Saudi government should reconsider its policies,” Mohammad Javad Zarif said at a joint press conference with German Foreign Minister Frank-Walter Steinmeier in Tehran on Tuesday.

He noted that Iran has never sought “any sort of tensions” with neighbors, Saudi Arabia in particular.

Zarif said Iran calls for “rational behavior” on the part of the Saudi government.

The German minister will hold talks with Iran’s President Hassan Rouhani and Parliament (Majlis) Speaker Ali Larijani the next day.

This is Steinmeier’s second visit to Tehran after the conclusion of the nuclear agreement between Iran and the P5+1 group of countries, dubbed the Joint Comprehensive Plan of Action (JCPOA), in July 2015.

The top German diplomat made a two-day trip to Tehran in October 2015, a first such visit by a German foreign minister in 12 years, to attend a core group meeting of the Munich Security Conference (MSC) in the Iranian capital.

Iran and the five permanent members of the UN Security Council – the United States, France, Britain, China and Russia – plus Germany started to implement JCPOA on January 16.

After JCPOA entered into effect, all nuclear-related sanctions imposed on Iran by the European Union, the UN Security Council and the US were lifted. Iran in return has put some limitations on its nuclear activities.

The nuclear agreement was signed on July 14, 2015, following two and a half years of intensive talks.