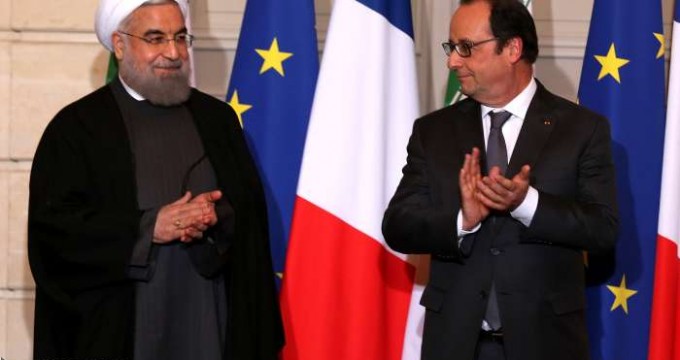 Iran and Iraq have discussed a reciprocal visa waiver program to boost tourism and trade transactions between the two neighbors.

Iranian President Hassan Rouhani sent separate letters to the heads of neighboring countries as well as the leaders of the Group 5+1 (Russia, China, the US, Britain, France, and Germany) member states, with whom Iran finalized a nuclear deal back in July 2015.

Spread of terrorism in Mideast threat to Europe: Iran’s Rouhani

Iran’s President Hassan Rouhani, in a meeting with his Italian counterpart in Rome, has described terrorism as the main plight afflicting the Middle East region, warning that an unstable Middle East will also adversely affect European countries.

A top adviser to Leader of the Islamic Revolution Ayatollah Seyyed Ali Khamenei will pay an official four-day visit to Moscow next week to hold talks with senior Russian officials.

Iranian President Hassan Rouhani, freed from the sanctions that pinched his nation’s economy for a decade, heads to Europe this week where he may sign a deal to buy 114 Airbus Group SE jets and about 17 billion euros ($18.4 billion) of Italian contracts.

Italian Prime Minister Matteo Renzi says Iran plays “a fundamental role in the stability” of the Middle East region, which is struggling with years of extremism and terrorism.

The grandson of Ayatollah Ruhollah Khomeini, founder of the Islamic Republic on Iran, has been excluded from contesting elections next month, his son said Tuesday.

The Vatican says Iran now should play a role in combatting terrorism as Tehran becomes a regional player to resolve Middle East conflicts.

Canada confirmed for the first time on Tuesday that it plans to lift its sanctions on Tehran and said that if Airbus is allowed to sell to Iran, then its aircraft maker Bombardier Inc should be allowed to export there as well.

Iran said on Tuesday that it has signed a basic agreement with China to re-design a heavy water reactor in Arak during the visit to Tehran by the Chinese President Xi Jinping over the weekend.

Iranian President Hassan Rouhani says the issues in the region can be solved through a diplomatic and logical approach.

MAKRAN (Tasnim) – The Iranian Navy test-fired several coast-to-sea and sea-to-sea cruise missiles named “Noor” (Light) with a range of 150 km during a massive naval drill underway in southeastern coasts of Makran, east of Strait of Hormuz.

A senior commander of the Islamic Revolution Guards Corps (IRGC) says Iran has stepped up boosting its missile capabilities since the US asked to curb them.

In an interview Thursday with FRANCE 24, Le Monde and France Culture, Iranian President Hassan Rouhani said restoring diplomatic ties between Iran and Saudi Arabia was a priority, but that it was up to Riyadh to take the initiative.

Iranian Foreign Minister Mohammad Javad Zarif says the nuclear agreement between Iran and the P5+1 group of countries has put an end to the Iranophobia campaign.

Yazd Province in central Iran has seen a five-fold rise in the number of tourists in 2015, says the deputy head of Yazd Cultural Heritage, Handicrafts and Tourism Department, according to The Iran Daily.

Iran defeated South Korea in a dramatic match and finished in fifth place in the 2016 Asian Handball Championship.

France to work with Iran on reducing air pollution: Official

The head of Iran’s Environmental Protection Organization (IEPO) said the country has recently signed an agreement with France for cooperation in various areas of environmental protection, including efforts to tackle air pollution in the Islamic Republic.

Iran’s first cargo of petrochemical products in recent years has left for Egypt, marking the resumption of trade ties between the two major Muslim countries, the Mehr news agency says.

France and Tehran signed a batch of 20 trade and construction agreements, the total worth of Iran’s agreements with France has not been revealed, according to the French president’s office.

Iran’s biggest shipping line hopes to start calling again at European ports, with plans for a bi-weekly service connecting India, Iran and Europe as early as next month, according to people familiar with the matter.

British Prime Minister David Cameron and French President Francois Hollande agreed that trade ties with Iran could be strengthened now that the sanctions had been lifted.

The Syrian army has reportedly managed to take full control of a strategic town in the southern province of Dara’a as they continue to gain ground in battles against foreign-sponsored Takfiri militants.

The Israeli regime, which is itself believed to be supporting militants in the region, says Turkey has been providing money to the Daesh Takfiri militants operating in Syria and Iraq through oil trade with them.

Iranian President Hassan Rouhani blasted Saudi Arabia for supporting terror groups and launching wars of aggression against the Muslim nations, and said Riyadh should apologize for what it has done.

Iranian President Hassan Rouhani called on UNESCO, the United Nations’ cultural organization, to make utmost efforts to protect the endangered cultural works and historic sites in Syria and Iraq from the devastating activities of terrorist groups.

German Chancellor Angela Merkel has defended her open-door refugee policy, arguing that asylum seekers from Syria and Iraq would go back home once the conflicts there end.

Airlines in the Persian Gulf Arab countries have taken a serious hit from Saudi Arabia’s severing of diplomatic relations with Iran this month, losing millions of dollars in revenue so far.