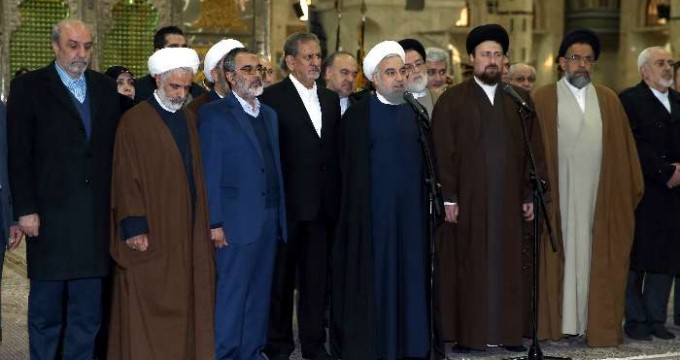 President Rouhani made the remarks after attending the Mausoleum of the late Imam Khomeini downtown Tehran to renew allegiance with the Father of the 1979 Islamic Revolution.

Iran’s success in nuclear talks with P5+1 and removal of sanctions was the result of people’s vote in 2013 presidential elections, he added.

Elsewhere in his remarks, the President advised the Guardian Council to prepare the ground for large turnout of people in the upcoming February legislative and Assembly of Experts elections.

Nothing should be able to dash ‘our hope,’ saying people’s presence in the elections is instrumental, he added.

‘We should not abandon the ballot boxes under any conditions,’ stressed the President.

Parliamentary elections will be held in Iran on 26 February 2016 to elect both the Islamic Consultative Assembly and the Assembly of Experts. It will be the first time, the members of two bodies are elected simultaneously.

Leader’s support of the government in nuclear talks as well as his stress on respecting people’s vote as a divine duty was important to improvement of the country’s situation, President Rouhani said.

He added that independence of Iran’s foreign policy does not mean that it wants to be isolated from the rest of the world.

Freedom of speech has been recognized by the Islamic Republic and people are free to elect and decide about their destiny, the President said.

Rouhani referred to the late Imam remarks and said both democracy and theocracy are inseparable parts of the Islamic Republic identity.