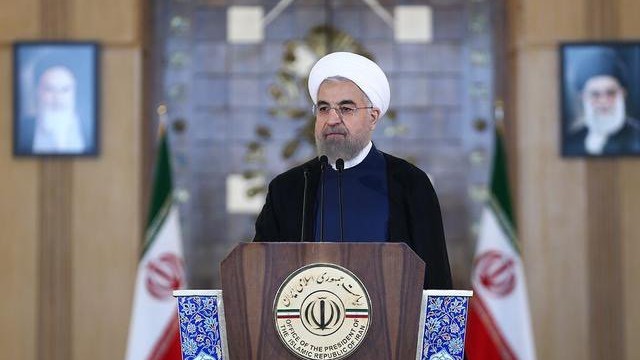 In an interview Thursday with FRANCE 24, Le Monde and France Culture, Iranian President Hassan Rouhani said restoring diplomatic ties between Iran and Saudi Arabia was a priority, but that it was up to Riyadh to take the initiative.

Diplomatic relations between Iran and Saudi Arabia have been severed since protesters ransacked the Saudi embassy in Tehran following the January 2 execution of Shia cleric Nimr al-Nimr in the Gulf kingdom’s Eastern Province.

Speaking to FRANCE 24 in an interview during his historic visit to Paris, Rohanicondemned the attack on the Saudi embassy, but stopped short of offering an apology.

“We condemned this action. Our responsibility was to find the culprits of the attack. We have found them, we arrested them. They are in prison,” said Rohani.

Iran has said that around 100 suspects have been arrested following the Saudi embassy attack.

Saudi Arabia’s moves to cut diplomatic ties “were not proportionate to the incidents”, Rohani said, adding that the Gulf monarchy was “muddling the game”. “What is certain is that the country that broke off our relations must be the one to try to restore them,” he added.

Escalating tensions between Shia powerhouse Iran and predominantly Sunni Saudi Arabia have cast a shadow on recent attempts to find a diplomatic solution to the Syrian crisis.

Iran and Russia back Syrian President Bashar al-Assad while the Sunni Gulf states – particularly Saudi Arabia and Qatar – have backed the Syrian rebels.

While both Russia and Syria’s Assad have accused Sunni nations of backing hardline Islamist groups, when asked if he thought Saudi Arabia helped fund terrorism, Rohani refused to be drawn into a war of words. The Saudis are “fellow Muslims”, he said.

‘We want to ease tensions with the Americans’

Rohani also expressed hope that Iran’s diplomatic ties with the United States, severed since the 1979 hostage crisis, would someday be restored.

“When you look at Iran and the United States, there are quite a few difficult questions that have been present for the past 30 years. It will be difficult to resolve all of them in a short time,” said Rohani.

“The United States was at the same negotiating table as Iran [during the nuclear talks in Vienna], which was something unimaginable only a few years ago,” Rouhani added.

Rohani’s interview came at the end of ahistoric visit to France following the start of a gradual lifting of nuclear sanctions in January. The visit was dominated by bilateral trade deals between major French and Iranian companies. These included a memorandum of understanding between Iran Air and Airbus for the purchase of 118 Airbus aircraft worth around €23 billion.

Rohani arrived in Paris on Wednesday for the first visit to the French capital by an Iranian leader in 10 years. He met Thursday with top French political and business leaders, clinching deals including the sale of Airbus planes and a car factory revamp that reignited a decades-old relationship between Tehran and French carmaker Peugeot-Citroen.

No alternative to supporting Assad

Political relations between Tehran and Paris, tense in recent years over Iran’s nuclear programme, have been further strained by the Syrian conflict.

During his trip to France, Rohani was keen to play down these differences by emphasising the common fight against the Islamic State (IS) group in Syria and Iraq.

“The priority is the return to peace, the return of refugees to their homes,” said Rohani. “Terrorists behead innocents…We must fight, everyone should fight [the IS group].”

In order to be effective in the fight against the IS group, Rohani stressed the importance of Assad’s government. “In the short term, there is no alternative but to support the Syrian army. Without the strength of the [Assad] regime, the army cannot effectively fight [the jihadists],” said Rohani.

UN-backed Syria peace talks are expected to start Friday in Geneva to try to end a conflict that has left nearly 260,000 dead. But Rohani was not optimistic about the talks. “The Syrian issue is too complicated. It would be too optimistic to believe that we could reach an agreement within weeks.”